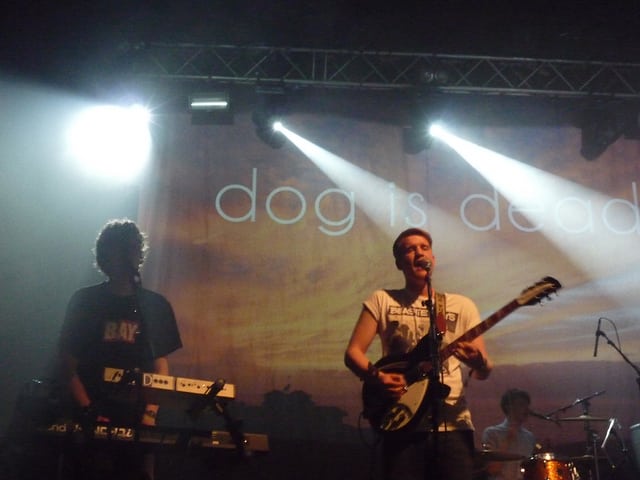 Dog Is Dead are out in support of their debut LP, All Our Favourite Stories. Photo: Effervescing Elephant @ Flickr

With their debut album All Our Favourite Stories released only 2 weeks ago, Dog Is Dead begin their UK tour with an intimate performance in Manchester. The relaxed atmosphere of Academy 3 created a perfect environment for their emotional brand of indie pop-rock.

The gig kicks off with support act Chateaux.  Not only do they sport a bassist from within our UoM ranks, but their tight musicianship deserves special mention. Playing a set of catchy indie tunes, the crowd are hyped for what is to come.

Following a decidedly less captivating second support (One-man band Beans on Toast), Dog Is Dead eventually come to the stage. They begin with the mellow tune ‘Get Low’, exposing us to their uniquely cool vibe. After playing a few more songs from their current album, they whack out the oldie ‘Burial Ground’ which gives us our first glimpse of the ever-loved saxophone solo (later to reappear in ‘Glockenspiel Song’).

A big feature of this gig is the emotion portrayed by the lead singer Robert Milton as he looks longingly to into the back of the venue delivering heart-felt lyrics in songs such as ‘Any Movement’ and ‘Two Devils’. After playing the single ‘Glockenspiel Song’ as the first part of their encore, they finish with the sing-along rock ballad ‘Teenage Daughter’.

Despite occasional mishaps; including guitar tuning issues at the beginning, a falling over saxophone microphone, and a broken drum pedal, the concert is remarkably professional and together in character. Overall, it is short and sweet. Though it is still early in the career of these five boys, they could be ones to watch. A few more tunes and a solid fan following could prove to be an excellent recipe for a truly great live indie band.