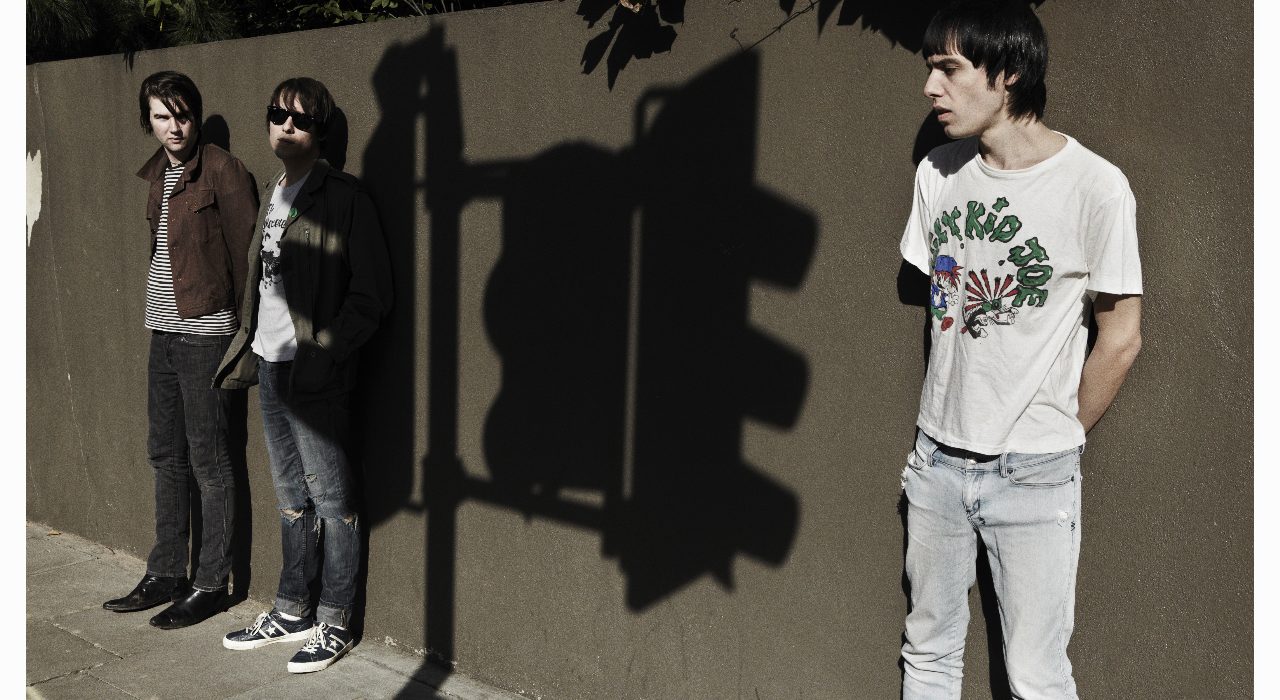 The Cribs re-adjusted to life as a three-piece with In the Belly of the Brazen Bull.

“We’ve been on tour for a third of our lives now. It’s become so fundamental for us,” reflects Ryan Jarman. He’s speaking to The Mancunion, along with twin brother Gary, backstage at the Apollo, in the thick of a lengthy UK tour that takes in, I suggest, more towns than the average band might strive to reach over the course of an average live run.

“The reason why we do tour a little bit more in-depth than some other people is because we genuinely believe that playing live is the most accurate way for people to understand what we’re about,” says Gary. “You can be written about in magazines or be played on the radio, but that’s still other people’s interpretations of what you’re doing. That’s why we did well on the second record; we didn’t really have much money behind us, or much of the industry’s infrastructure, but those singles did well because people remembered that we came to their town.”

May saw the release of the band’s fifth record, In the Belly of the Brazen Bull, a little over eighteen months since they announced a hiatus in the wake of appearances on the main stage at Reading and Leeds in 2010. Johnny Marr left the band in the interim, bringing an end to a three-year period of using the onstage introduction “We’re The Cribs from Wakefield, and Manchester,” and Gary claims that the former Smiths man’s departure provided the impetus to return to the studio sooner than originally expected. “It would’ve been weird if the last thing that people had heard of The Cribs was that Johnny had left. It just mobilised us. It was that kick of inspiration that we needed, because we found ourselves in a situation where we felt influenced to start working again.” On the reasons for the split, he claims that both parties simply “wanted different things. We did think about the future, and Johnny spoke a lot about making a second record, but at the same time we wanted time off, and we didn’t want to make it so that he couldn’t do what he wanted to.”

The sessions for Brazen Bull saw the band recording with a host of producers, including the legendary Steve Albini, who produced first single ‘Chi-Town’. Despite his intimidating pedigree – Nirvana’s In Utero, Pixies’ Surfer Rosa and Page and Plant’s Walking Into Clarksdale are all counted among his engineering back catalogue – Ryan reveals that getting into the studio with Albini was a straightforward process. “I just called him and told him we wanted to do about four tracks with him and that was it; his way of working is just first come, first served, really. We’d wanted to work with Steve since we were teenagers really; we were supposed to work with him on our first album but we’d already started recording it elsewhere.” Gary adds that Albini’s business ethics were particularly attractive to the band; “he doesn’t record bands based on profile or money, or anything like that; he’ll go from recording Page and Plant at Abbey Road for the same amount he’s charging an unsigned local band from Chicago.  He’s managed to maintain that way of working even though he’s been successful, and I think that’s really commendable.”

The band also coaxed Queen producer David Richards out of semi-retirement, although those tracks ultimately didn’t make it onto the record. Gary attributes the decision to work with Richards to his love of Queen’s Innuendo, and remains hopeful that the material will eventually see the light of day. “Put it next to the Albini stuff, or the [Dave] Fridmann stuff, he did most of the record, and they just don’t match. I’m still psyched that we did it, but you wouldn’t think it was us so much if you heard it – I think it’s gonna trip people out.”

Alongside more traditional merch stand fare as t-shirts and posters, the band are selling copies of The City Is Ablaze on this tour, a compilation of ten years’ worth of the post-punk fanzine Ablaze, for which Gary has penned the epilogue. It’s yet another reminder that The Cribs are far closer, in terms of approach and philosophy, to the punk scene than to the ‘indie’ scene that they found themselves wrapped up in after headlining the NME tour in 2008. It’s a misunderstanding that’s a little sad at times – a particularly unsavoury incident in 2009 saw The Slits bottled and heckled throughout their support slot to the band in Doncaster by a section of the Cribs fanbase with an attitude completely at odds with that of the Jarmans themselves. Do they consider themselves a punk band?

“Yeah, absolutely,” says Gary, “and I think that book, which isn’t really anything to do with us, is indicative of our state of mind; we just want to spread the word about things we like. We thought some of our fans would dig it too, and I think that’s the essence of punk really, that communal sense of everyone helping each other out, and a lot of people involved with that fanzine is very much in tandem with the way we like to consider ourselves to operate, that DIY sort of thing. That’s what punk means to us really, much more than the aesthetic of the spikes and the leather and that sort of thing. Huggy Bear sound nothing like the Sex Pistols, and they sound nothing like Sonic Youth, who are totally a punk band…I think it’s just a state of mind thing really. That’s what makes it exciting for a band like us, being in control of what you do, and having things be as much about the culture and the ethic as the songs and everything else.”

Between the geographical closeness of their native West Yorkshire and the impact of having a genuinely legendary Mancunian in the band for a time, The Cribs acknowledge that Manchester is a city that’s been particularly kind to them over the years. “It sort of adopted us, Manchester,” says Gary. “To have a city sort of take you as their own like that has made for some really great memories. We played two nights at the Ritz when Johnny first joined, and that was pretty special because that’s where The Smiths played their first gig.” Ryan, on the other hand, is especially fond of the art deco surroundings of tonight’s venue; “you never fail to be amazed by the size of the place when you’re loading your gear in to the Apollo. There’s always such a good sense of occasion.”

The Cribs are set for a trip to some less typical tour spots in the coming weeks, with shows in Greece, Turkey and Hungary booked before they take some time off; with Brazen Bull having proven a grandly-conceived, jaggedly-executed triumph, and their live shows as incendiary as ever, we can only hope that this next break is as short as the last; if there’s one thing The Cribs struggle with, it’s keeping quiet.

The recording of this interview can be found on SoundCloud here.