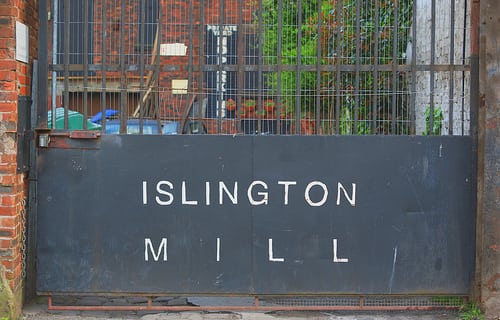 17/10/2012, Micachu & The Shapes @ Islington Mill, really got me thinking. Here is a band who season avant-garde sonic explorations of detuned guitars and circuit-bent synths with whimsical indie-pop sensibilities, the result of which is something truly unique and identifiable. Performed with an impish vitality, Micachu’s music appears to function as pop whilst refusing to cater for the exigencies or audience of your standard pop music.

With regards to genre, in smudging together influences as far afield as Harry Partch, The Velvet Underground, Timbaland and Joy Division, there is a certain analogous difficulty in locating a category in which one could place the group. Indeed, much better is it to compare what Micachu is to music with what Andy Warhol was to fine art. Through alternatively recontextualising prevalent cultural reference points – say for example, the backbeat in pop music and the image of the Coca Cola can as a symbol of American consumer culture – both artists can be seen to play on the connotations attached to each artwork’s respective nominal subject (sound/image). Thus, rather than limiting herself to sound-worlds commonly connoted with the indie-pop scene, Micachu is able to simultaneously pay homage to and yet distance herself from the pop idiom. Mucking about as she does instrumentally, texturally and structurally (and therefore with the presumptive cultural frameworks attached to pop music), Micachu’s tunes seem to both serve as a satirical response to the banality of the ever-homogenising palette of the contemporary pop world, and equally as a celebration of the universal appeal of ‘four-to-the-floor’ beats and catchy refrains.

Her songs also adhere to the sense of disposability many of Warhol’s pop-art pieces took on. Indeed, Micachu writes about very ordinary, easy-to-relate-to subjects, and the tracks are delivered in an apparently punk-esque, throwaway manner. 5 out of 14 tracks on the new album are under two minutes long, which means that whilst intensely creative (and far from many of the utterly vacuous, musical abortions which find their way onto Radio 1), Micachu’s music doesn’t come across, nor is it meant to interpreted as particular profound. In short, these quaint, twisted approximations of pop song illustrate the need to identify the fine but distinct line that there is to be drawn between the sincere and the serious. It is just lots of fun.