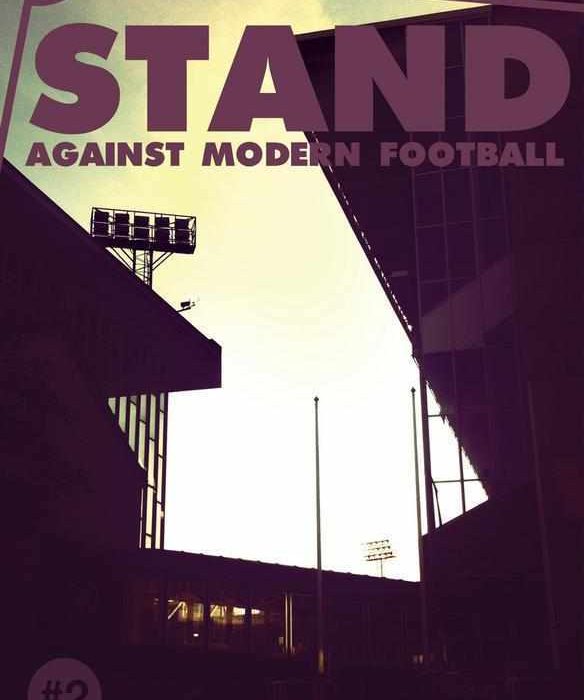 STAND aims to unite fans who are 'becoming increasingly disgruntled with the state of modern football' Photo: www.standamf.com

Taking a stand against modern football

Goal celebration music, grown men wearing face paint, soulless out-of-town stadiums – the list of wrongs with modern football is almost endless. Aguero’s last-minute winner may have provided some of the most memorable footballing drama in recent memory but it can’t hide the farce the game in this country has become.

Events over the summer break only served to reiterate the sorry state modern football finds itself in. Cardiff City, a club who have played in blue since 1908, underwent a makeover which now sees them play in red. The Bluebirds have become the Dragons. Why, you may ask? Cardiff’s new Malaysian owner Vincent Tan gives two reasons: one, he sees red as a lucky colour, and two, he believes Cardiff will now be more marketable in the Far East. History and over one hundred years of tradition apparently has its price.

Closer to home, problems have also surfaced. The Glazer takeover has left Manchester United saddled with debt. Slightly further afield, Stockport County are still reeling from years of an unjust ground share agreement with rugby union’s Sale Sharks. If any of this strikes you as being wrong don’t worry: you are not alone.

STAND is a new fanzine which aims to highlight the problems of modern football in Britain. Co-editors Daniel Sandison, Seb White and Mark Smith may have only met each other on a handful of occasions but social media has given them the platform needed to stay in touch and create a fanzine which – unusually – isn’t divided along club lines.

Against Modern Football is a movement which is already prominent in Europe but for one reason or another it’s one that has never really taken off on our shores.

“With some notable exceptions, the relationship between club and fan has never been particularly stormy over here, whereas on the continent fan groups are much more political and willing to go further to make their point.” Smith explains.

“There’s almost no coverage of fan issues in the mainstream media but there’s certainly an appetite for it, which is perhaps why people have so readily got behind what we’re doing.”

He isn’t lying about the positive reception either. Dialogue on a message board soon led to a Twitter account being created. Almost instantaneously, they were trending within the UK.  Their first issue – released at the start of this season – sold out all of its one thousand copies within a matter of days. This may not seem a huge figure but with printed press struggling more than ever before, this is hugely impressive for a small start-up publication with no marketing budget to speak of. Even the national press has taken notice, with a positive report featuring in the Independent last month. Such success has seen STAND double its number of copies with its recently released second issue.

“For the latest issue, we’ve tried our best to highlight one of the biggest bugbears – inflated ticket prices. It’s a fact that if a pint of beer had increased at the same rate as top flight football tickets, you’d be spending £8.85 a pint.”

Other examples further underline how obscene prices have become. On average, ticket prices have risen by 716% since 1989. If such an increase was to have taken place within the property market, the average house would set you back over half a million. Your student budget would also take a hammering if high street prices went up accordingly, with a pair of trainers costing you £327.60.

How then, has this been allowed to happen?

“If you put a frog in boiling water it’ll jump straight back out. If you put it in cold water and boil it slowly it won’t notice it is boiling until it’s too late.” Smith said.

“I think for most people, the changes have been too gradual to notice.”

All this may leave you with the impression that STAND is little more than a collection of old men moaning but fortunately it’s interspersed with a fair share of humour.

“After reading two or three rants on the trot, things can easily become repetitive. We’ve countered that quite well I think, by including original artwork, daft humour and even poetry. In launching STAND we felt a traditional fanzine format and tone would be the best way to do things and so far we’ve stuck to that. First and foremost, STAND aims to be a decent read.”

Smith is fully aware that there is no easy solution to the problems and STAND isn’t trying to change the world. It’s just a fanzine, albeit a very good one. But by giving fans across the country a collective voice and a platform to voice their discontent, STAND might just make some people wake up and try to fix some of the wealth of problems football in this country faces.

STAND #2 is available to buy for £2 from www.standamf.com.