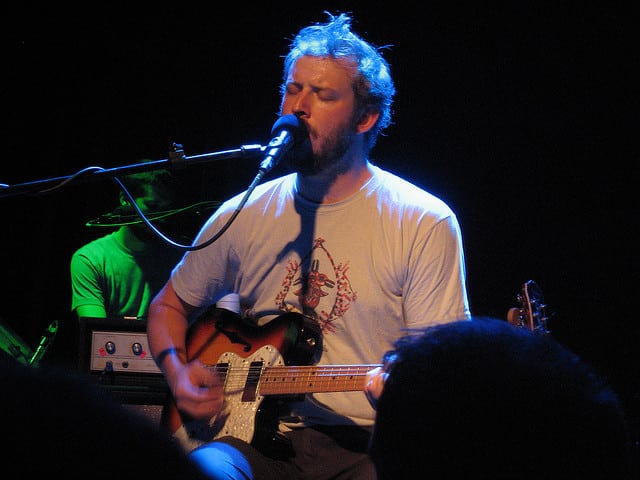 Bon Iver made the transition to the city's biggest venue with consumate ease. Photo: Shelmac @ Flickr

As the main lights dimmed on the packed Manchester Arena and the obscure fabric hangings framing the stage became an icy white, we were  transported into the world of Justin Vernon: winter in the woods. His rise to fame is well documented, not a simple rags-to-riches story as such, but one of a log-cabin-in-Wisconsin-to-sell-out-global-success. Opening with the instantly recognisable chords of ‘Perth’ from his self-titled latest album, and accompanied by his brass instrumentalists, we were transfixed. The huge concert hall in which we stood suddenly became the most intimate musical space.

Regaling us with tunes new and old, the band’s latest venture ‘Towers’ stands out as a more traditional, upbeat folk song among his usually raw and sorrowful sounds, while ‘Holocene’ was an unadorned reminder as to the sheer skill and imagination of Vernon’s musical and lyrical ability. ‘Wash’ was appropriately performed amid a rippling ice blue light, similar in its tinkling sounds to ‘Minnesota, WI’. Part of Vernon’s skill as an artist is that he never allows his audience to forget where he began: that cold winter in Wisconsin is present in his song titles, set and most importantly his sound.

‘Creature Fear’ came to a crescendo in a cacophony of sounds, the stage bathed in red light, pre-empting one of his first and most popular hits, ‘Blood Bank’. The heavily auto-tuned yet haunting ‘The Woods’ was performed by Vernon alone on the stage, illuminated by a single white light and recording his own voice via reverb to create layer upon layer of sound which filled the silent arena. Vernon’s speaking voice is surprisingly throaty for someone who can hit such thin high notes, and he kept up an infrequent yet entertaining conversation with the audience: largely responding to people who kept calling him Bon.

There was nothing they could play that would not have wowed the crowd, who were the most still group of people I have ever seen at such a large gig. Vernon’s music and melodies have the power to utterly enchant you, and his sparse, haunting lyrics can move you to tears – as they did the first time I saw the band live. While the difference between the tone of each album is noticeable – his latest Bon Iver is decidedly more upbeat while the debut For Emma, Forever Ago is one of the most pertinent testimonies to heartbreak ever recorded – on stage the songs flowed seamlessly.

With his songs inspired by lost love and his life before Bon Iver marred by illness, Vernon cuts an extremely loveable figure on stage, and truly fulfils the nicest-guy-in-the-world image which seems to have stuck by him, whether he wills it or not. Ending the encore with the sensational ‘Skinny Love’ and ‘For Emma’, I left the arena feeling happy instead of haunted, wishing I were that Emma and noting that it was the start of a very good winter indeed.

3rd Year English Literature student who enjoys taking a break from academic writing to explore the more aesthetic things in life... Looking forward to this year on-board The Mancunion as Beauty Editor.