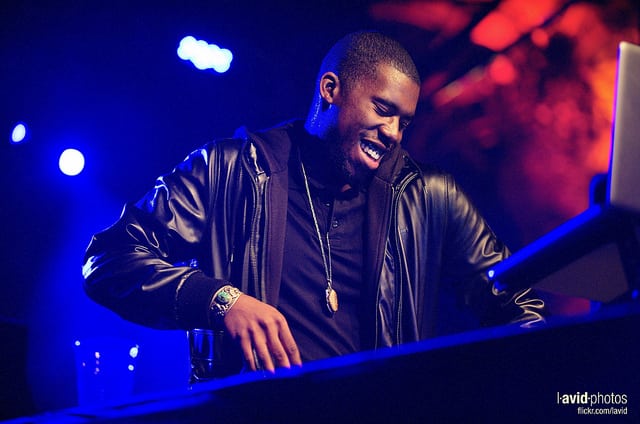 The Red Bull Music Academy came to town last Friday, joining forces with Warehouse Project to produce one of the most enticing line ups seen in Manchester all year. We arrived just after eleven, narrowly missing German legend Prosumer. The former Panorama Bar resident didn’t appear best pleased about being the given the graveyard shift of 7.30-11, but then on a night dense with such diverse, talented performers, something had to give. Escaping from the OTT UK bass stylings in room two, Benji B provided welcome relief with his eclectic, African-tinged selections. After briefly poking our head into the Red Bull room, we made our way, tentatively, to try and catch Flying Lotus in room one.

Now, I’ve always favour small and intimate venues over big and busy, so maybe my opinion’s rendered a little invalid, but all the same… room 1 was a nightmarish experience. Full to bursting, sweat dripping from the ceiling, the performers’ sound just a muffled bass frequency lest you risk elbowing past the angry, sodden masses to the front of the floor. It would have been at least bearable, but Flying Lotus, capable of either brilliance or self-indulgence depending on his mood, totally opted for the latter. Playing a mixture of grime, dubstep and ‘swag’ rap, he spent more time jumping round the stage shouting into a Britney-style microphone than paying attention to the god awful tunes coming from his laptop. Where were the tracks from his superb recent LP? We didn’t stick around to find out, making for the now relatively empty confines of room two, where Ben UFO was, as ever, striking a perfect balance between familiar Hessle sounds and classic house and techno. The night kept getting better from there, in fact: Shed’s revered live set fully lived up to its billing, brutal at points but as intricate, bombastic and classy as the multi-monikered German’s productions would imply.

Floating Points provided a perfect end to the evening, expertly blending his now trademark 130 bpm disco cuts with tribal rhythms, samba, and finally deep house brilliance from the likes of Pepe Bradock and Soul Capsule. The night, then, was a qualified success: most of the big hitters on the line up delivered, and the atmosphere and crowd was about as good as I’ve seen at WHP (discounting DJ Harvey’s glorious return last month). That said, while room one has always served a specific purpose at Warehouse Project – keeping the dickheads away from the deeper offerings in smaller rooms – it was just unbearable at time on Friday. The promoters would do well to learn from clubs like Trouw in Amsterdam, or even Canal Mills in Leeds, on how to make big room clubbing a more enjoyable experience. A better air conditioner would be a start.