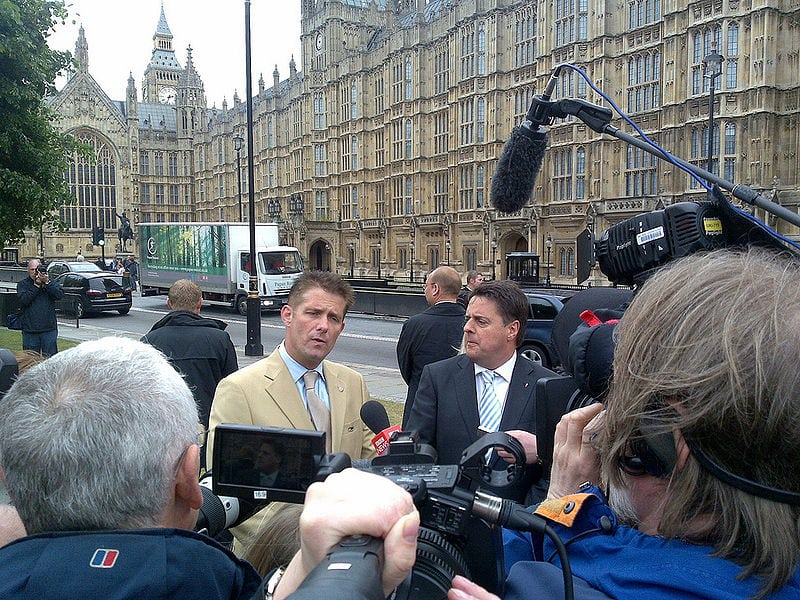 Nick Griffin speaking to the press outside the Houses of Parliament

Leeds University Union are set to hold a referendum on whether their student paper, Leeds Student, should be censored. Voting will be open online from 26th November. After increasing tension between individuals in the NUS and Leeds Student following the publication of an interview with MEP Nick Griffin, leader of the BNP, the student body will have four days in which to vote on if reporting conducted by student media at Leeds on certain political groups should be banned.

On Friday 26th October Leeds Student published an issue in which the MEP was interviewed by an openly gay student at Leeds University. Following a tense conversation, where the MEP described two men kissing as ‘creepy’, Griffin explained: ‘You [students] may think I’m a monster, but look at what your fate would be in an Islamic republic of Britain.’ The National Union of Students, following publication of the article, responded promptly by publishing an open later asking Editor Lucy Snow to immediately remove the article from the Leeds Student website. Their argument was that fascists, such as the leader of the BNP, should not be allowed a platform to express their viewpoints.

Editor Lucy Snow stood by her decision to publish the article, and reported in The Guardian on how she felt: ‘It is essential that his views [Griffin] are exposed for what they are. Leeds Student merely gave Griffin enough rope to hang himself.’ The arguments have led to Leeds University Union calling a referendum on the issue after inconclusive talks in a Union forum. The referendum question asks: ‘Should the Union’s exclusion of fascists and hate-speakers be extended to student media?’ 1,500 votes must be cast for the conclusion to be considered legitimate. On the reason behind the motion, the Equality and Diversity Officer at Leeds SU, Charlie Hopper, states online that: ‘Freedom of speech means Nick Griffin is not arrested for his views. That does not mean that we all need to see them printed and all over our bars, libraries and lecture theatres.’

Although it can be understandable that the Equality and Diversity Officer at Leeds University Union should try to protect the minority groups that officials like Nick Griffin prejudice against, the question arises over whether this should lead to censorship. With so many platforms, such as social media sites Twitter and Facebook, openly discussing contentious issues in society why should it fall on student media to be banned on joining in the debate? Considering the issue is about a far-right politician who would support such censorship of the media, it seems rather hypocritical that the NUS would even consider such measures.

My opinion follows many of the advocates of free media; the student body should not be treated as a passive mass. Students should be encouraged to learn about politics and the difficult issues politicians address; whether it be regarding immigration or civil liberties. Issues surrounding far-right fascists and hate-speakers should not be pushed under the carpet as this will only encourage such opinions to grow. The radical opinions of such people in society should be tackled head on via healthy debate and exposure in the press and online. The press play an important role in not only exposing, but educating. Leeds Student, by tackling the issue and interviewing Griffin, are encouraging students at the University of Leeds to find out more about such issues and engage with them in our society. Students should be encouraged to learn, not ignore.

The United Kingdom has laws on free speech deliberately in order NOT to exclude any opinions. Whether Griffin’s opinions are considered vile and disgusting, he should be allowed to voice them. Students’ Unions and the NUS are there to represent the voice of the student body, and should not act so domineering. Although a referendum is a democratic process which allows individuals to voice their opinions, much of the time it isn’t needed. Much like the Police and Crime Commissioner elections last week, the likelihood is that few people will vote on such a specific issue. The students at the University of Leeds probably have far more direct worries than whether or not an interview with Nick Griffin should be published. NUS officials should encourage debate over issues in society, not seek to limit the exposure of them.

Journalism should be considered much like art; not all art depicts the niceties of life. Art can be aggressive and confrontational, trying to engage viewers to explore thoughts and ideas surrounding the piece. Journalism seeks to do the same, to spark comment and debate. Leeds Student made the right decision in publishing the interview.

The referendum at Leeds Uni follows rising tensions between NUS officials and student media over the past few weeks. At an NUS Senate meeting on 11th October, Queen Mary Students’ Union President, Babs Williams, described student journalists as ‘all dickheads’.  The NUS and Students’ Union Executives across the country should seek to work with student press, not against it.