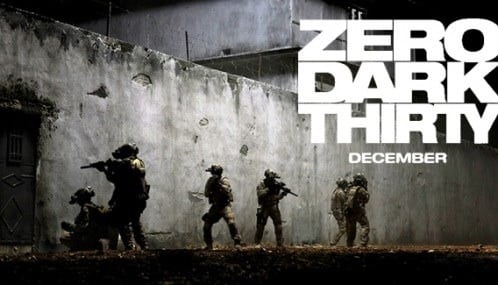 It seems Kathryn Bigelow is in the habit of breaking records. In 2008 she became the first woman to win the Academy Award for Best Director for the astounding The Hurt Locker. Now, four years later, she has surely broken the record for shortest time between an event taking place and a film based on it being released. By the time Zero Dark Thirty hits screens it will have been little over eighteen months since a team of Navy Seals killed Osama bin Laden in what has become a defining moment of the 21st Century.

Kudos then to Bigelow and her screenwriter Mark Boal (whom she reunites with from The Hurt Locker) for staying topical. But the truth is Bigelow’s film about the hunt for bin Laden in fact precedes the event itself. Before the dramatic events in Abbottabad, Bigelow was already in the process of making a film about the ten year hunt for the world’s most wanted man. Originally it was presumed to focus on the frustration of those most involved in the hunt and the psychological turmoil that came with it. Much in the way The Hurt Locker wasn’t really about defusing bombs, it was about human trauma, Zero Dark Thirty would be more about the emotional impact and dedicated nature of those pursuing bin Laden than the manhunt itself.

But real life events changed things significantly, with Osama bin Laden now dead the nature of the film shifted considerably. Unparalleled access to classified documents means Zero Dark Thirty looks set to be a fascinating insight into how the CIA finally caught their man. That’s is not to say the film has disregarded the themes of its original incarnation. With a heavyweight cast, including woman of the moment, Jessica Chastain, Zero Dark Thirty will likely be as engaging as a character study on obsession, as it will be one as one of the year’s best thrillers.