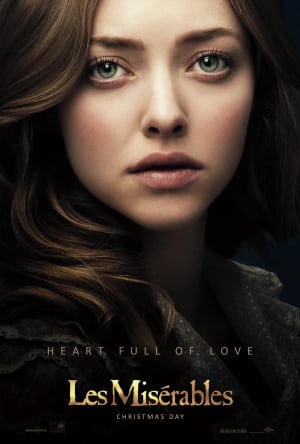 Tis the season to be jolly and what better way than to have a good sing song? There may well be loads of good films out this Christmas, but Tom Hooper’s Les Misérables, is sure to be the film highlight of the year.

Whether you’re proud to admit it or not, we all have a favourite musical and it’s the film industry that we have to thank (or blame) for that. Countless actors have been unable to resist the charms of the musical, stepping up to the microphone to showcase their inner Judie Garlands. From Pierce Brosnan to Alan Rickman, Renee Zellweger to Nicole Kidman – they’ve all had a go. Even Marlon Brando proved himself to be a singing sensation, banishing none other than Frank Sinatra from the limelight in Guys and Dolls (was there anything that man couldn’t do?!)

All joking aside, this is a prestigious genre. Many musicals have gone on to receive not only great commercial but critical success. Robert Wise’s epic The Sound of Music tackled subjects as varied as nuns misbehaving to the rise of the Nazis and did so with great gusto.  Winning five Oscars and being nominated for four more, it also went on to knock Gone With the Wind off the top spot, becoming the highest grossing film to that date. Similar success stories have included Bob Fosse’s Cabaret. Winning eight Oscars, including best actress for the one and only Liza Minelli, this was not a film to be messed with, tackling equally challenging subjects with similar musical ingenuity. Then came Mamma Mia!. Whilst being the most talked about and laughed about (poor Colin!) film in a long time; the film’s celebration of Greece, abs and disco flares, shot Mamma Mia! to super stardom, becoming the most commercially successful film in the UK since Titanic.

Yes, Tom Hooper has a lot to live up to, but that doesn’t mean his latest film won’t maintain the musical’s prestigious reputation within the film industry. First off, his choice of musical isn’t bad. Les Misérables has so far been left untouched by directors and filmmakers, perhaps because it happens to be the longest-running musical of all time (no pressure then, Hooper!) Not sure you’re familiar with it? Two words: Susan Boyle.

But if there’s anyone who’s going to give it a good go it’s Tom Hooper. Being quite the Oscar winner himself, with his last film The King’s Speech winning four Academy Awards back in 2010, the only way has to be up. Teaming up once again with casting director Nina Gold, Hooper has produced a great cast with incredible voices. A-listers such as Amanda Seyfried, Russell Crowe, Hugh Jackman, Helena Bonham Carter and Anne Hathaway are acting and singing alongside the likes of Eddie Redmayne and Sacha Baron Cohen to bring the musical adaptation of Victor Hugo’s beautiful and seminal novel to cinematic life.

Not wishing to stop there, Hooper has secured this film’s place in cinematic history as being the first musical to have purely live singing performances on the soundtrack. There’ll be no miming or auto tuning in this one – what you see will be what they heard 100 takes later during filming, live on set. This will not only reveal the true singing talents of the cast, but showcase Hooper’s incredible vision as a director. Start spreading the news! There’s a place for Les Misérables somewhere and it’s at next year’s Academy Awards…or perhaps that’s just a dream I dreamed.