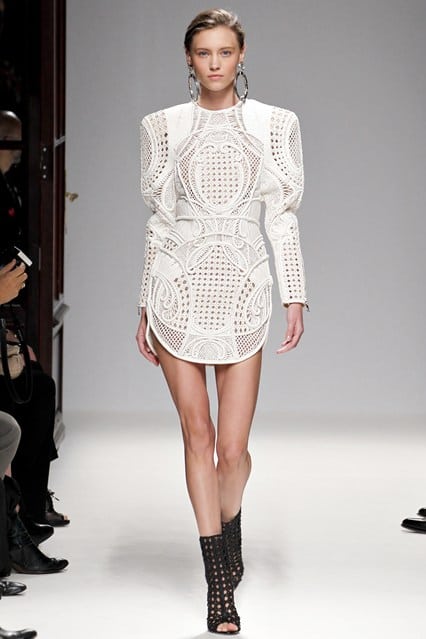 A new year, in many cases, means a fresh start and the catwalks of SS13 certainly detoxed. There was a common theme of new minimalism: sharp clean lines, fresh faces and unfussy geometric prints. And it wasn’t just in the conclusion ‘it’s hip to be square’ (see Louis Vuitton’s checkerboard prints) that couture showed its smarts. One of the most visually stunning catwalk themes was also one of the, seemingly, simplest: all white. Some went clean, some went clinical, but all went clever, showing how much figurative colour cut and fabric can provide. Stella McCartney’s bold top-to-toe use of suggestively sheer broderie anglaise, Balmain’s oxymoronic baroques and Chloé’s laser-sharp cut-outs were textural stand-outs. Bleached, yes. Boring, never. And white’s pervasiveness among accessories will ensure that, come summer, every little thing is going to be all white.

She’s here. She’s there. She’s everywhere. On the cover of Vogue, on the catwalks of 38 separate SS13 shows, in campaigns for Chanel and Burberry. And her eyebrows are better than yours. It can only be Cara. I would tell you Model Of The Year 2012 Miss Delevingne is one to keep an eye on in the coming months but you’ll hardly need to. Those cut-glass cheekbones, envy-inducing eyebrows and tousled dish-water-blonde locks are set to be unavoidable this year. If I’m sounding like I’ve got a girl-crush that’s because I do. But I make no apologies: have a quick browse through her chucklesome Twitter photo feed and tell me you don’t have one too. Thought so, we’re all suckers for a sense of humour.

If you missed the vivid animal prints, bold breton stripes and innovative use of quilted fabric (proving it’s not just for grandma’s dressing gown) of his Topshop collection, you can just about be forgiven. However, in 2013 as his womenswear lines begin to find their feet, ignorance of J.W. Anderson will become a crime against fashion. King of contradiction, his designs blur gender boundaries, bringing a refreshing androgyny to both menswear and womenswear. Named Emerging Talent of 2012 at the British Fashion Awards and an ardent avoider of evening-wear: he’s causing something of a sartorial stir that’s set to whip itself up into a fashion frenzy come September’s catwalks.