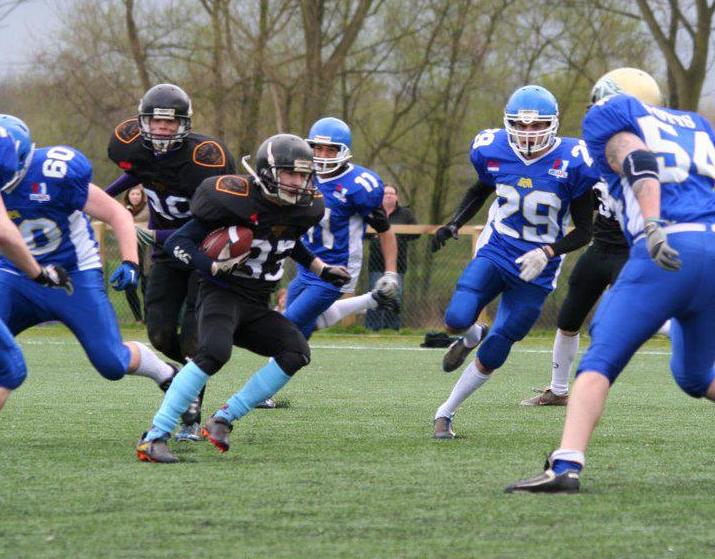 The Superbowl was not the only American football event to entice the student population earlier this month, as on the same day UoM’s Tyrants took on MMU Eagles in the American football Varsity. It is a fixture in which the Tyrants dominate the history, having won the previous two contests, and they took to the field looking to maintain their 100% Varsity record and continue their push for the playoffs. The Eagles, on the other hand, rooted to foot of the BUCS league, were looking for only their second win of the season. The match took place on the artificial pitch at Burnage Rugby Club, and the handful of supporters who made the journey into the fringes of Stockport were witness to a competitive display from both sides that was worthy of the Varsity tag.

Before the tie was allowed to start, there were rallying cries from Tyrants and Eagles alike, as some even applied war paint for the battle ahead. As was perhaps to be expected, the match consisted of mostly running plays, rather than the expansive passing showcased by the top-level NFL. This was typified by the Eagles’ attempts to commence the game with an onside kick, though possession ultimately came under Tyrant control. Play continued in a typically combative fashion, with each team’s defense giving rousing support to the offense, and vice versa, when they were not in action. Though the Tyrants made more substantial territory in the first quarter, it ended with the scores still level.

The Tyrants continued to dominate in the second quarter, but it was only through an Eagles’ fumble which they made a breakthrough; the resulting turnover leading to a quick touchdown. The offending Eagles defensive back was clearly furious with himself, kicking his removed helmet in frustration as he left the field. It proved to be a crucial point in the match, as the Tyrants pressed home their slim advantage. Tyrants quarterback Christopher Payne (who gets the Mancunion vote for MVP) was particularly effective as the Eagles’ defensive floodgates seemed to open.

The Tyrants continued their dominance over their increasingly weary opponents in the remaining quarters, and though the Eagles rallied to score 14 themselves, there were to be none of the heroics of the San Francisco 49ers. The Tyrants held on to secure their third successive Varsity triumph, though the battling Eagles also left the field with their heads held high. Both teams headed back to Manchester to enjoy their respective Superbowl parties, and with the American sport’s continual rise to prominence in the UK we feel that both clubs could do more next time out to make this one of the biggest events in the university sport calendar.