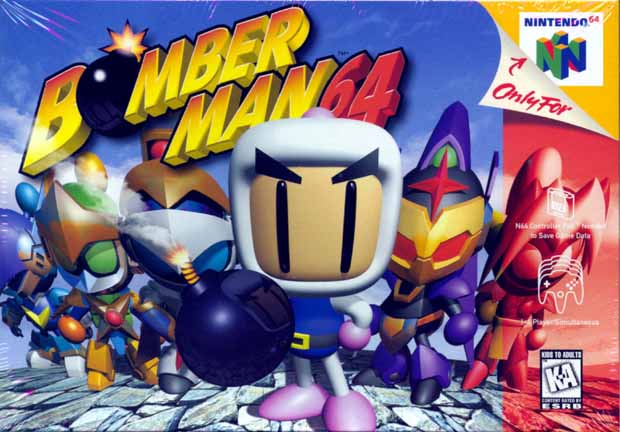 Years ago, my brother and I wouldn’t settle scores over Mario Kart, nor Smash Bros. We wouldn’t even use Goldeneye. For us, a man’s worth was measured in his ability to play Bomberman 64. The fast paced, pseudo-strategic multiplayer battles were the only way for us to decide, for example, which one of us had actually started a fight. The results were often shocking and incorrect.

Major injustices aside, I loved Bomberman. There was nothing quite like the varied stages and challenge of multiplayer matches. Finding hidden items in the single player game unlocked many silly costume items for dressing up your multiplayer Bomberman, which could then be saved to the revolutionary new technology that was the memory card.

When the people (Bombermen?) of the imaginatively name Planet Bomber come under attack, Bomberman rushes to fight off the invading flying fortress with the aid of the mysterious Regulus, and a shit-ton of bombs. I still remember the pain of beating what I thought was the final boss only to discover that Bomberman’s only ally suddenly, but inevitably, betrayed him. I learned to never again trust strangers.

There were five areas, each made up of two adventure and two boss stages. Adventuring was across 3D stages, a first for the series, and required careful practice and bomb-bouncing skills to complete, skills that took young me considerable patience and commitment to achieve. Bomberman 64 remains one of my benchmarks for boss fights. There were several beast to despatch and bomber rivals to fend off. One in particular stands out as a childhood nightmare, a giant ice spider with long stabby-legs. It played to both my fears, that of spiders and that of being stabbed by a giant ice spider.

I could go on about Bomberman 64 for days, however my brother just questioned my journalistic integrity and now must back up his arguments with bombs.