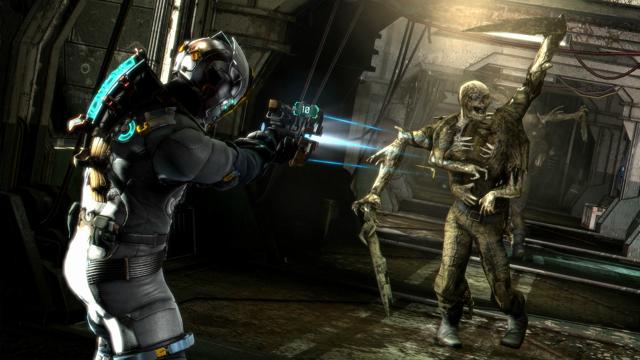 In 2008 the survival horror genre was rocked by the release of Dead Space. The story of Isaac Clarke, a seemingly mute engineer everyman abandoned on an rusting spaceship with great hoards of the reanimated crew, armed only with his wits and an welding tools. This combination of resourcefulness and helplessness made Dead Space a rare thing, a game that is simultaneously terrifying and rewarding.

Now we return to that bleak universe with the release of Dead Space 3. Much has changed, Isaac seems to have found not only his voice, but also a fair arsenal of weapons and abilities to send the Necromorphs back to the grave. The transition away from survival horror towards a more action-based experience has been natural. By the third game the player like Isaac, has had umpteen Necromorphs jump them from every angle and has learnt to scan likely entry points, dispatching the abominations with ruthless efficiency. This hardening of both player and character requires Dead Space 3 to bring something new to replace the desperation of the earlier titles.

The story and character development are brought to the fore more than in any of the other games. The player is invited to enter Isaac’s head as he is dragged back into a world he has been running from both physically and mentally. For the most part, this change in tone works, the story is epic in scale but tightly written and the voice acting is first class, allowing the player to easily slip into the world and characters.

Visually, Dead Space has always struck a nice balance between claustrophobic corridors and sweeping space vistas. But there was a particular space environment towards the start of the campaign that I simply had to stop playing and stare at for a minute, for me it rivals any scene presented to date.

The character models and interiors have the same attention to detail and realism that have always characterised the Dead Space series, bringing the visceral gore that players of the first two games will know and love.

As with the visuals, the sound is very effective, weapons are distinctive, as are the cries of different enemy types. I won’t tire of the sickening squelch when you finally put a Necromorph out of its misery with your boot.

The mechanics of the game are very similar to that of the previous titles, all the weapons are geared towards dismembering of the enemy, foes can be slowed and there are numerous physical manipulation puzzles scattered throughout the game. Notable changes include a system of customisation for weapons, which provides many opportunities for weirdness. My best moment was when I realised there was a secondary slot on the plasma cutter, in which I could put a plasma cutter. Thus the ‘Yo Dawg’ was born.

Perhaps the most daring part of Dead Space 3 is the inclusion of a ‘hop in – hop out’ cooperative mode where you can invite a friend to play with you at any time in the single player campaign and they will seamlessly slip into the game, not as a mute sidekick but as a full character, fundamentally changing the way the game is played. This is most obvious during scenes where Isaac is ranting and hallucinating at a wall, which is usually an unplayable cut scene turns into a desperate scramble for survival as the second player has to defend Isaac whist he freaks out. These changes make playing the cooperative mode a special experience without compromising the experience of people playing alone.

This cooperative mode has replaced the competitive multiplayer introduced in Dead Space 2. The loss of multiplayer was a small price to pay for one of the only examples of cooperative gameplay done right in a predominantly single player game.

Dead Space 3 is not a perfect game by any means, but it is a very chilling experience alone or with a friend that very occasionally completely blows you away.