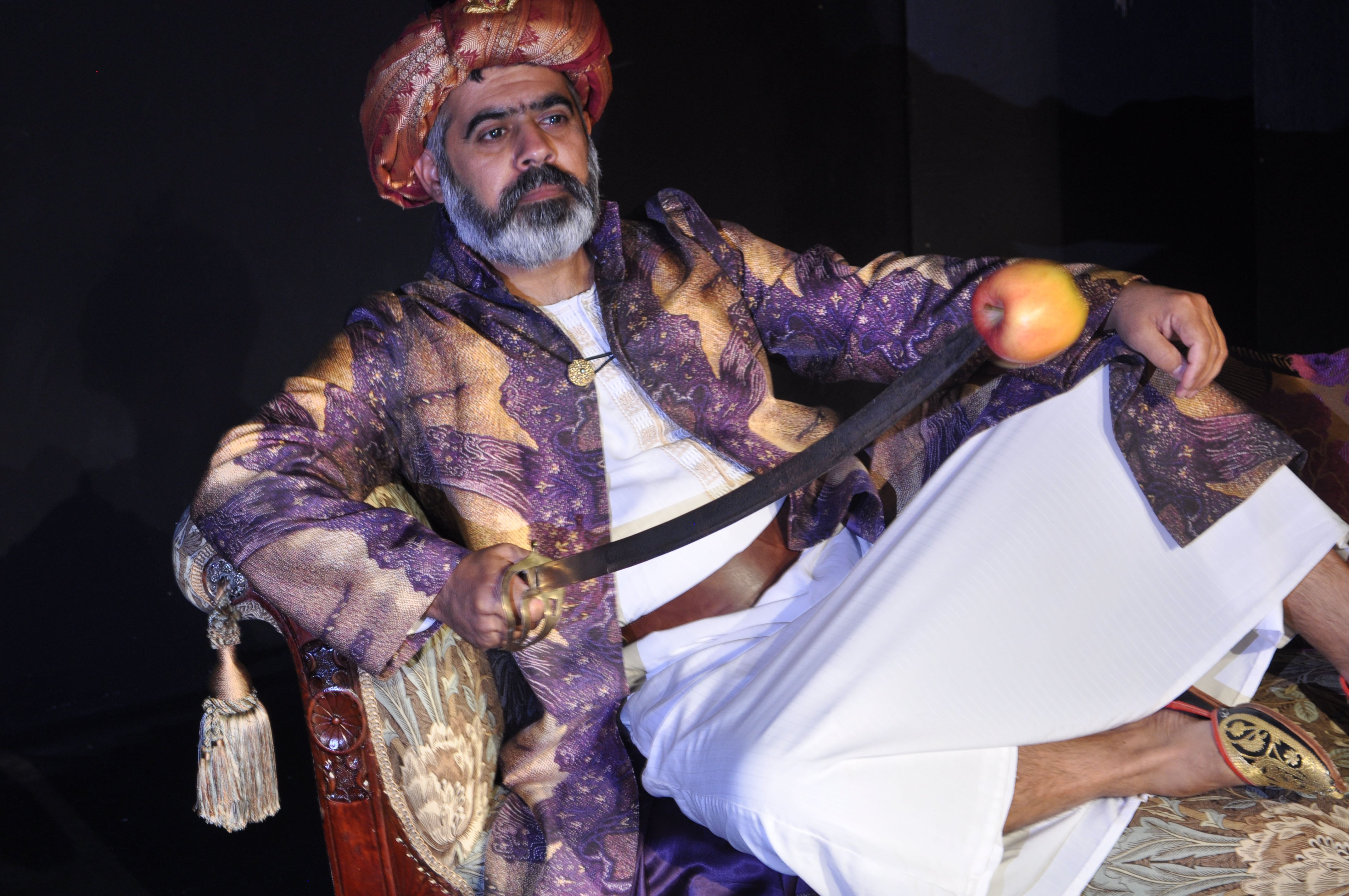 ‘Game Over’, the latest production of Iraqi-born Manchester graduate Abas Eljanabi, is a play centered on the recent uprisings in the Middle East, which, as a native of Iraq, will be an issue close to Eljanabi’s heart.

The play was strongly framed from the outset as primarily discussing the Arab Spring, however, the subjugation of middle-eastern women was also discussed. It was told as an adaptation of ‘Arabian Nights’ and a continuation of the legendary 1,001 stories that Scheherazade told Shahryar in order to save her life.

The production opened with Scheherazade prophesying a dictator, Sadam Hussain, followed by an invasion of by the ‘new world.’ Despite being billed as a ‘work in progress,’ the use of visual media initially seemed very complimenting to the presence of the two actors, providing shocking images of events throughout the gulf-wars and civilian response to tyranny that proved effective amongst the audience. The emotion from the script poured out when Shahryar, played by Eljanabi, questioned ‘what kind of devil would allow this?’ in response to the government turning on it’s own people Scheherazade responded ‘human-being is the worst kind of devil.’ Eljanabi’s performance was strong throughout in the elaborate production, even managing to inject a brand of dark humor when discussing the place of women within the Middle East, especially with his own actions towards women in his life-time.

The unfortunate thing regarding the production was, despite the strength of the script and characters; the story at times became disjointed. This was most notably shown by the heavily relied upon visual media which, despite contributing to the play at the start, quickly became out of sync with the drama on the stage. This was first shown through the almost random outburst of music throughout the latter half of the production, which instead of adding emphasis to the characters performance simply acted as a distraction. The technology failed again in the dying moments of the play as the DVD that the images were shown on ended early leading to the screen which had consistently shown images of atrocities, now offering the audience a choice to either ‘play movie’ or ‘scene selection,’ something which did not attribute to the drama of the climax of the play.

The billed statement of ‘work in progress’ shone through strongly due to how the stage was arranged, as the story was often complicated by the use of the sparse set. At one point, Scheherazade picked up a small box she referred to as ‘magical’ in the centre of a very long-winded speech explaining it’s meaning that, at least for myself, was confusing. Out of said box she also plucked a conker, without explaining its significance, nor even referencing the conker again. The message also became difficult to follow as to what side Shahryar agreed with. Although he did not agree with Sadam’s actions, referring to the USA as ‘liberators’ evoked fury and comical pictures of George Bush were shown every time his name was mentioned. The idea of ‘blood for oil’ was also circulated as the main cause for the war, rather than actual liberation. The play unfortunately came to an abrupt end, not really explaining who could be victors of this war, or whether or not the civilians could triumph against such outstanding odds.

The productions concept was admirable, and the use of visual media juxtaposed with the ancient Arabian Nights story was initially effective, however, once the audience got used to the media the cracks in the production started to show. Work is needed on this play in every respect, from learning lines and accents to syncing with the technology and stage craft, however, once these problems have been addressed, it could have the makings of a very good production.

In his new production ‘Game Over’, actor and playwright Abas ElJanabi fuses traditional Arabic storytelling with modern media in an innovative reinvention of the popular collection of tales known as ‘One Thousand and one Nights’ (or ‘Arabian Nights’).

The play merges two subplots: firstly an airport official (played by ElJanabi) interrogates a woman (Sepideh Nazari Pour) about the contents of her novel, which she reveals to be ‘One Thousand and one Nights’. She reads aloud from the book, transforming the two actors into the novel’s protagonists. This subplot acts as a continuation of ‘One Thousand and one Nights’, in which the female protagonist Scheherazade tells Shahryar, the king of Persia – medieval Iran – a series of tales in order to delay her impending execution. Having won her liberty, she is requested to tell the king a story that he could not possibly imagine, to which she responds with a foreshadowing account of recent events in the Arab world. She tells him of the Arab Spring, the tide of revolutionary unrest that has been rising since 2010. The title ‘Game Over’ refers to the slogan that has been used by Arab Spring demonstrators towards the oppressive regime. The changes between settings are done effectively, and helped by a minimalistic set.

The play blends the traditional and the new by including a projector screen in the background that is used both as a backdrop and to accentuate the horror of what Scheherazade describes, by showing images of the Arab world’s recent struggles. This mixing of media reflects not only the form of ‘One Thousand and one Nights’, which uses many different modes of storytelling but the methods of the Arab Spring, which employs traditional form of protest with the use of new social media.

There were a few aspects of the performance that I found distracting and unfortunately detracted a little from my enjoyment of the piece. The music was often introduced suddenly and at points that did not feel appropriate, which often destroyed the atmosphere of the more climatic scenes. Furthermore, the end was rather abrupt and left me unsure as to whether the play had actually ended. If I had not seen ElJanabi being handed flowers by a member of the audience I would have been waiting for the second half of the play for some time! Although the performances were strong both of the actors’ parts, the dialogue was not always clear due both to the volume and thick accents of the performers. As the play is driven greatly by the dialogue, this did affect my enjoyment of the production.

Despite this, I found the performance of ‘Game On’ to be interesting and thought provoking, both in concept and execution. The play claims to ‘[encompass] themes of gender and power in the Arab world’, which I felt was done effectively through the juxtaposition of the female author and male airport official and king and queen of Persia. Although the situations take place in different times and places, the dynamic of the powerful male and the threatened female is shown to have stayed constant.

Three stars out of five