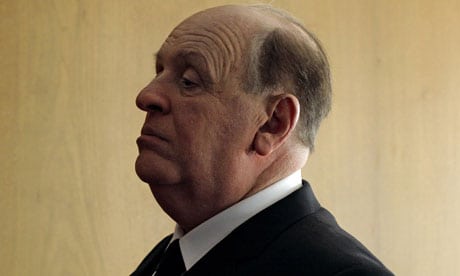 Alfred Hitchcock is a name revered by film critics and fans. His identity as the master of suspense has ensured his legacy in academia and cultural art and one need only look at the last couple of months to see how Hitchcock has been culturally resurrected; dealt with firstly via the BBC’s drama The Girl (UK. December, 2012) and now, Sacha Gervasi’s biopic Hitchcock (UK. February, 2013).

Hitchcock attempts to adapt Stephen Rebello’s non-fictional account of the story behind the creation of the cult horror Psycho (1960) whilst also providing insight into the fractured psyche of the genius behind the film that brought horror to suburban America.

What Gervasi actually delivers is a shallow and mediocre glance at Alfred Hitchcock as he gambled his reputation and wealth on a “nasty little piece of work” that was met with scorn by Paramount Pictures executives determined to squeeze a final contractually obliged film out of the ageing director, whilst upholding the Hays Production Code. Rather than a film which delved into the fragility of the iconic director, Hitchcock instead felt like a naïve and self-conscious production, intent on winning silverware.

Anthony Hopkins dons the fat suit and prosthetic jowls and, whilst he visually resembles Hitchcock and has the accent near perfect, this is as far as the resemblance stretches. Hopkins delivers a safe performance which fails to deliver the depth of character to compliment his aesthetic strength. Scarlett Johansson is a convincing archetypal Hitchcock blonde girl, and James D’Arcy delivers a brilliant Anthony Perkins as the scopophilic, infantile adult, Norman Bates. These latter moments of conviction were fleeting and, as the story became concerned with the relationship between Hitchcock, his wife and Psycho, both Johansson and D’Arcy were shunned. We are left with a film which looks good but fails to bring the narrative or character development to compliment the aesthetic detail.

Bemusement arises at the fact that a film sold as a biopic of Alfred Hitchcock seemed more focused on the life of Lady Hitchcock, Alma Reville played in a routine performance by Dame Helen Mirren. Mirren plays Hitchcock’s unsung collaborator who feels the pressure of marriage to the director and battles to support Psycho whilst growing increasingly distressed at her husband’s intimacy with his leading ladies Janet Leigh (Johansson) and Vera Miles (Jessica Biel). Mirren’s plot creates sympathy greater than any felt for the anxious Alfred which undermines the film’s initial premise.

In the rare interludes when Hitchcock tries to deliver an alternative insight into the director’s delicate psyche it does so by exaggerating the influence of Wisconsin murderer Ed Gein upon Psycho’s twisted anti-hero Norman Bates. Gein appears in Hitchcock’s visions, guiding him through the mind of a psycho killer. These moments do little more than offer cheap scares and the suggested level of influence Gein had upon Robert Bloch’s original creation of Norman Bates is over played.

This film promised so much and failed to deliver. Overshadowed by the opinionated and controversial line of argument within The Girl, Gervasi’s biopic seems to be at pains not to alienate Hitchcock fans who may have felt insulted by Toby Jones’ sinister portrayal. If you are looking for something which breaks the veil of the legend behind such films as Psycho and The Birds then locate The Girl. More could have been made of the fragility of a legend staring disrepute in the face and yet a lack of bravery failed to carry this off. Hitchcock is only mildly entertaining and at its best it is a good way to avoid the Manchester rain.