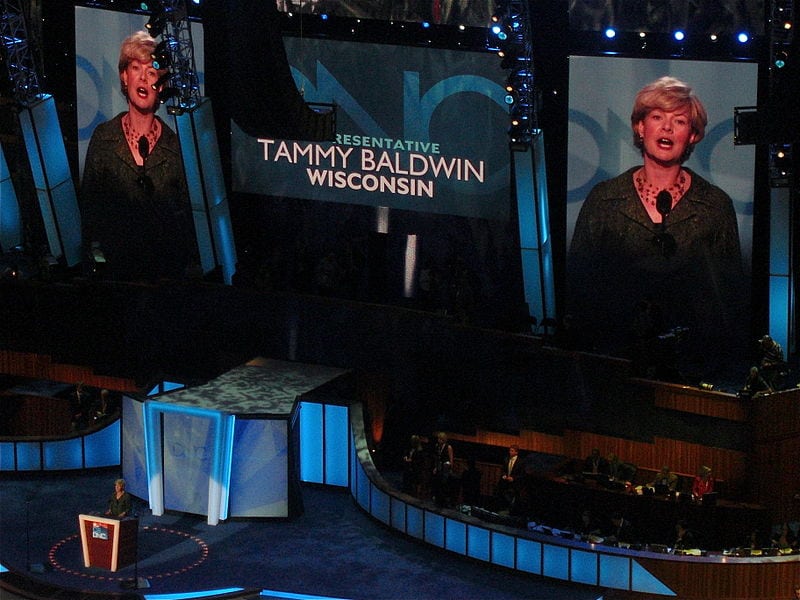 In the furore of the Presidential elections of 2012, many marvellous things occurred. Not only did the American people vote to keep Obama and reject the socially conservative republicans, rape deniers and general turds extraordinaire were defeated and the utterly fantastic Elizabeth Warren was elected to Senate. But it is not her of whom I wish to speak, but of another, an even more ground breaking result for America, for women and particularly LGBT women. The election of the first openly homosexual senator in the form of Tammy Baldwin, and a fairly awesome politician additionally represented an amazing victory in an evening of amazing victories.

Ms Baldwin has been an elected representative since 1993, where she served until 1999 in the Wisconsin Assembly. In the 1992 elections she was one of just six openly LGBT politicians to be elected. She was an early advocate for the LGBT community when in office, stating her disappointment at Bill Clinton’s compromise with the infamous ‘Don’t ask don’t tell’ policy, proposed legalizing same sex marriage in Wisconsin in 1994, and proposing domestic partnerships in 1995. She also is against capital punishment in the state.

On women’s rights, she was given a grade of 100 from the League of Women Voters in 2007 for her support of such policies and ideas as the Equal Pay Act, the Ledbetter Fair Pay Act, stronger enforcement of laws against sexual violence and violence against women. She was a key supporter of the National Breast and Cervical Cancer Early Detection Program Reauthorization Act of 2007, which helped low-income, underinsured, and uninsured women pay for cervical and breast cancer-related medical services.

This is not the only good thing she has done for Healthcare provision in the US, she authored the Veteran Vision Equity Act which protects benefits for veterans; she spoke at the 2004 democratic convention at prime time on the issue of health care. During the 110th Congress, she wrote the Reeve Paralysis Act which authorizes additional funding for the treatment of ailments that result in immobility.  She has also had the concerns of the LGBTQ community in mind in her politics, pushing for provisions to the healthcare reform bill to address the past neglect of the queer and trans* community. Examples of this include the Early Treatment for HIV act, the effect of which would have been to allow states to provide Medicaid coverage to low-income individuals living with HIV and AIDS and the Tax Equity for Health Beneficiaries Act which intended to end a tax for homosexual employees whose partners were covered under their employment health insurance. Unfortunately, not all of these eventually made it through to law.

One hopes, and far from a vain hope, that she will continue with policies and ideals like this for many years to come in the senate. With people at the forefront of US politics like Tammy Baldwin, we can all feel a little less distressed by the world’s most powerful nation.