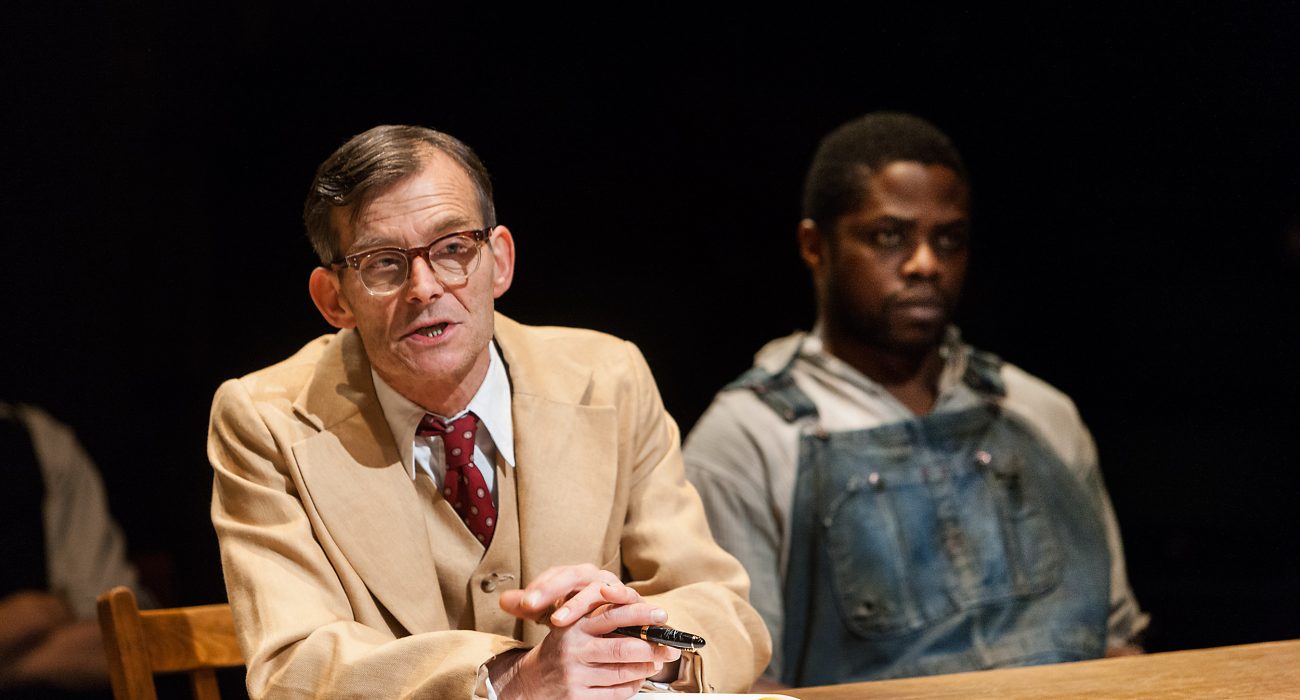 Nigel Cooke as Atticus Finch (left) and Okezei Morro as Tom Robinson in To Kill a Mockingbird at the Royal Exchange. Photo: Jonathan Keenan

It had been a number of years since I last read Harper Lee’s ground-breaking novel, but Christopher Sergel’s adaption has maintained all the poetry and poignancy of the 1960 classic.

The beauty of Lee’s novel was that it explored the potent theme of racism in the Deep South through the prism of the bright-eyed naivety of children. The task to transport this unique viewpoint onto stage is a challenging one but one which Sergel and director, Max Webster, rise to magnificently.

Webster has cast three ‘child’ leads who perfectly balance the rambunctious and indignation needed to play Scout, Jem and Dill. In particular, Shannon Tarbet delivers an endearing and energetic performance as Scout, capably handling the scenes of both humour and pathos. Tarbet is supported by the excellent Rupert Simonian and James McConville as Jem, Scout’s protective big brother, and Dill as their friend who stays with them during Tom Robinson’s trial and whose character was rumoured to be based on a young Truman Capote.

Webster and co. have also found themselves a fantastic Atticus in Nigel Cooke. Cooke captures all the meek and mild-manners of Atticus which make him such a beloved but frustrating hero. Cooke also benefits from a great physical resemblance to Gregory Peck’s Atticus from the 1962 film which adds to the gravitas of the production.

James Cotterill’s set is functional and effective but adds nothing of particular interest to the production. The most interesting stage choice the producers have made is instead of having actors play the jury during Tom Robinson’s trial, they have the audience themselves stand in as the jury.

This means Atticus’ wonderful closing statement to the court is said directly to the audience. An original and provocative choice given that the one thing both the jury and the audience shared was that they were both almost entirely white.

If there are any aspects of the play which falter then the decision to have the actors break character and read extracts from the original novel is a curious and distracting one. It has the unfortunate effect of diluting the intensity of the scenes and becomes quite jarring. The three man band which played during scene changes also struck a slightly bemusing note as their role in the play was never clear and I felt their removal would have been no great loss.

However this problem is minor and does little to detract from what is a terrific staging of Lee’s seminal masterpiece bolstered by some inspired lead performances.