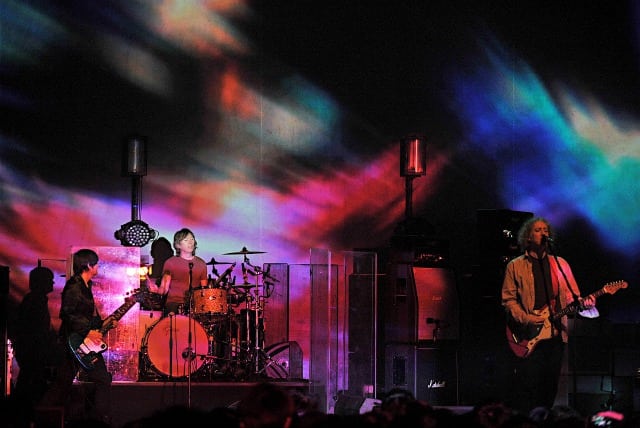 My Bloody Valentine lived up to their legendary reputation for extreme volume with a punishing two-hour set. Photo: Chincha.co.uk

Seeing paramedics at a gig is an oft-worrying sight, respirators and other medical apparatus are not items you’d assume in a live setting, but at a My Bloody Valentine show the cataclysmic volume ensures it’s pretty much a given. From the moment the band launches into ‘I Only Said’, the audience is witness to a total sensory overload. Swirling melodies make the heart swoon; columns of distortion raze everything before them and jackhammer drums lock the crowd into an incessant clockwork groove. For four unassuming people to make music both frightening and gorgeous, and deliver it without compromise is a delight to witness.

The band pulls from an arsenal spanning two decades, but their attack is so ferocious that the oldest material sits comfortably alongside the revered Loveless and choice cuts from new record m b v. Tracks like ‘Come in Alone’ and ‘Soon’ are the pillows above the bed of nails of ‘Thorn’ and ‘Only Shallow’, but one thing is clear, volume is very much the order of the day. The venue is almost levelled by ‘You Made Me Realise’; when the band launch into the ‘Holocaust Section’, it’s met with an almost knowing cheer from parts of the audience. If you think that name is tactless, it’s not without reason. A single chord builds into a cyclical, apocalyptic sheet of distortion, the volume steadily rising to almost unbearable but oddly captivating levels for a ten minute duration. It’s here the paramedics’ presence is truly noticeable, and a rush of people moving from the front proves MBV’s unfettered noise is not for the faint of heart.

The set isn’t wholly perfect. At times, Bilinda Butcher’s vocals sound like off-key caterwauling rather than sweetly serene lullabies, and it takes the band three attempts before they fully pull off ‘Feed Me with Your Kiss’. That said, these complaints are nothing when compared to the set of monolithic, utterly invincible noise the crowd has just experienced.