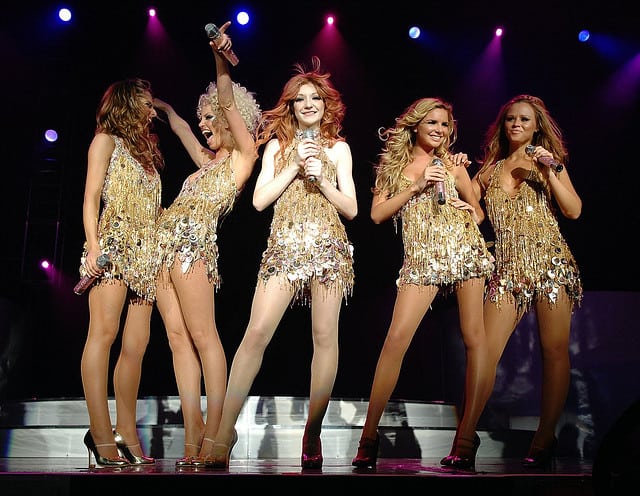 Ten years after they won Popstars: the Rivals, the five ladies of Girls Aloud are back after varying solo success. While Cheryl Cole became the people’s princess of 2011, Sarah Harding starred in a film with Denise van Outen and Danny Dyer that made £600 in its opening weekend.  Swings and roundabouts.  To celebrate their anniversary the girls have released the obligatory greatest hits compilation accompanied by a twenty-date arena tour.

Fittingly, support on the tour comes from Amelia Lily.  Both had the fate of their careers decided by the British voting public and were then helped on their way by the powerhouse that is Xenomania.  Lily came third in the 2011 edition of the X Factor and has since achieved some success, with her debut single ‘You Bring Me Joy’ reaching number two in the charts.

Unfortunately, the stage at the MEN is not designed for an artist performing without the huge amount of staging that usually characterises arena shows.  To her credit, Lily tried her best to bring some atmosphere to her set but she was fighting a losing battle.  Standing in front of a black curtain that was shielding Girls Aloud’s stage set-up from view, she belted her way through a selection of tracks from her upcoming debut album.  At one point she was joined by an acoustic guitarist, which might have worked well in a smaller venue but in the arena just failed to capture anyone’s attention.  Her wise choice to close her set with her big single provided a small high point.

In contrast, Girls Aloud had the crowd in the palm of their hand from the minute the curtain dropped.  Harnessed onto a giant sign suspended above the crowd, which bore the name of their band, they opened with their debut single ‘Sound of the Underground’, making it perfectly clear why they were still able to do an arena tour of this size ten years after they started.

The production values throughout the show were incredibly high, with all the dancers and costume changes you’d expect.  The first costume change turned the concert into something resembling a Victoria’s Secret fashion show, with Nicola rising out of the floor sporting an enormous Indian headdress and Cheryl with angel wings, while the others had similar gigantic feather contraptions strapped to their back for ‘The Show’.  They shed the appendages for ‘Love Machine’, which served as a reminder of why they’ve dominated the British pop scene for an entire decade.

Behind all the showiness and the expense that allowed them to put on such a production was just an entire night of really, really good pop songs.  They’ve already stated that this tour will be the end of Girls Aloud and they’ve managed to send it off in a spectacular style.  For the encore they emerged from the floor in matching floor-length, red sequined gowns.  In a symbolic move they sang ‘Stand By You’ while videos of their career highlights, including the moment they won a BRIT in 2009, played in the background.  Some of them looked visibly moved by the whole experience, with Sarah apparently unable to sing.

It was hard not to take all this with a pinch of salt, however.  Knowing what they’ve been doing and the discrepancies in their success, it’s hard to believe that they’re all as friendly as they appeared during this show of unity.  It begs the question: will this really be the end?  With Cheryl’s star waning as Cher Lloyd overtakes her in popularity and the others not really making a great impression on the charts with their solo efforts, will they really be able to resist resurrecting Girls Aloud, especially when it’s clear that they still have such a loyal fan base?  It’s hard to say, but if they stuck to the formula that they’ve been using for the last 10 years, as demonstrated tonight, then there’s no reason why not.