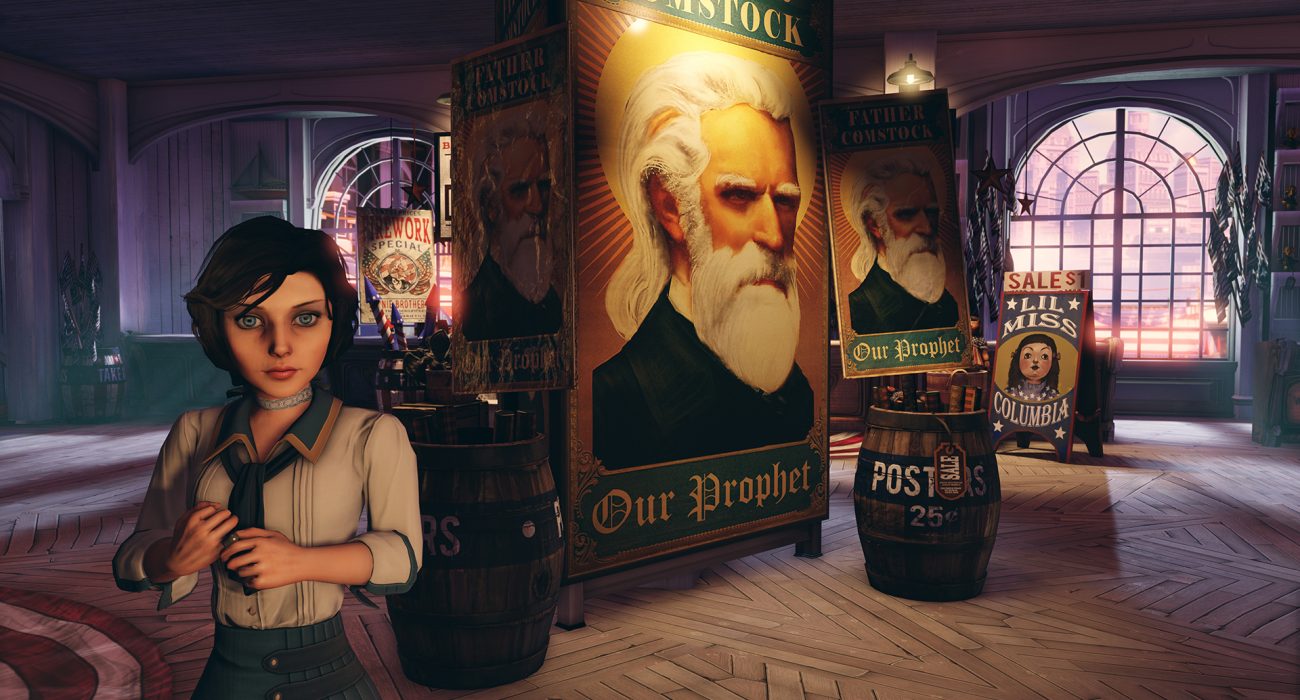 Fans of the BioShock franchise thus far have been treated to some of the most inventive and chilling plot lines the gaming industry has had to offer. The first two games combined horror, fantasy and thriller with impressive results bringing a dark and deserted under-water world known as Rapture to life. All of this is turned on its head in the up and coming BioShock Infinite as developers Irrational Games attempt to win over new fans. Infinite draws heavily upon American Exceptionalism and the Red Scare whilst retaining the steam-punk feel that made it such a visually pleasing experience last time around.

However this is where many of the similarities with previous BioShock games end. Director of design Bill Gardner has admitted compared to Rapture, Columbia is larger, richer and more detailed, but will this be enough to keep fans happy with the new direction?

The story in Infinite takes place before the events of the first two BioShock games. Co-founder of Irrational games Ken Levine even failed to rule out the possibility that BioShock Infinite takes places in a different universe to that of its predecessors entirely – giving us an idea of the new direction the franchise is taking.

The player takes control of a former agent of the Pinkerton National Detective Agency called Booker DeWitt. Drawn to alcoholism and gambling as a result of events Booker witnesses at the Battle of Wounded Knee, he is hired by secretive individuals who task him with infiltrating the air city Columbia in order to rescue a women called Elizabeth. Once in Columbia, Booker soon realises Elizabeth is extremely powerful and central to a civil war that continues to rage in the sky-city. Two factions called the Founders and the Vox Populi both want Elizabeth, and DeWitt must protect her from an array of dangers including a Robotic Songbird (wait and see), in order to get her out alive. Not to make things any easier for Booker tears in the fabric of space-time threaten to destabilise the city.

So what can we expect from Infinite that will help it stand out from its predecessors and where will it replicate the tried and tested formula? The game is still a first-person shooter and retains the odd roll-playing element that will help bring to life the utopian world of Columbia. But Columbia itself is full of people. Rapture on the other hand was pretty much deserted, so expect the experience of interacting with citizens and seeing the citizens react back to your in-game behaviour to change the dynamic of your experience.

To move around Columbia Booker will mainly use grappling hooks and a series of connected railways known as the skyline, which join together the high rise buildings of Columbia. In terms of the more technical side of the game, only two weapons can be carried at any one time, and careful choice of weaponry will be key as the environment is set to be pretty interactive and bad choices of weaponry could weaken your effectiveness.

One of the most obvious omissions from Infinite will be the loss of tonics, plasmids and EVE, something which I will personally miss having spent hours collecting them in the previous games. In their place will be vigors, gear upgrades and salt. To gain more powers and abilities you have to collect vigors. They will grant you abilities such as telekinesis and electricity manipulation. There will be no Gene banks in Infinite, so once a vigor is used it is permanent and cannot be changed, so expect more emphasis on character customisation rather than level-to-level equipment grabs as it were. Salt replaces EVE as the power source for these abilities. Gear on the other hand will improve your strength or damage and can be collected throughout the game. There will also be four available slots for gear upgrades and various upgrade paths. They will be key in defeating the various bad guys who will pursue you throughout the story, including the Handymen and the Motorized Patriots.

Three separate batches of downloadable content should be made available and all related to the storyline. Whilst alternative weapons, gear, costumes and vigors will come as extra content. Infinite is out on the 26th of March, and should be well worth the dosh!