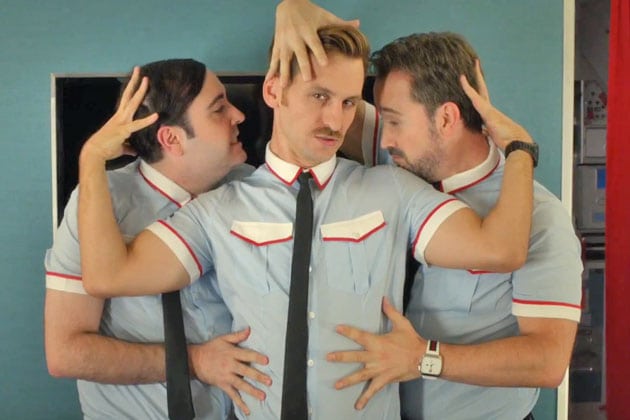 This May sees the release of I’m So Excited or Los Amantes Pasajeros, the latest film from the titan of Spanish Cinema, Pedro Almodóvar. Whilst the title cleverly describes the current state of most Almodóvar fans, the film itself seems to be about a topic few of us would get excited about – following one fated plane journey towards Mexico City and the events that occur between passengers, crew and everyone in between.

This “stuck in a vehicle” scenario may seem familiar. After all, it was about this time last year that audiences were eagerly anticipating the release of the Cronenberg/Pattinson masterpiece Cosmopolis. But one look at the trailer tells us that I’m So Excited will be poles apart from the tense tale of a brooding hunk and his exploits in the back of a limo. King of the camp, flamboyant and extrovert, and with very much an “anything goes” philosophy; Almodóvar is always the one to knock us out with his crazy scripts and equally unpredictable characters. With Almodóvar himself describing the film as “a light, very light comedy” and with cameos from previous muses and Spanish acting royalty Penélope Cruz and Antonio Banderas, I’m So Excited is set to be a celebration of all things Almodóvar!

Excited yet? Well prepare to go into overdrive. If you’re unable to wait for its general release on the 3rd May, The Cornerhouse is hosting a UK launch screening of the film on Tuesday 23rd April, followed by a satellite interview with Pedro Almodóvar himself. Described as the most internationally successful Spanish director since Luis Buñuel, and having written and directed some of the most brilliant, outrageous and hilarious pieces of cinema the world, let alone Spain, has ever seen, an insight into the mind of this Oscar-winning director is an opportunity few will be able to pass up on. So fasten your seatbelts, this is one flight – I mean film – you won’t be needing your emergency exits for!