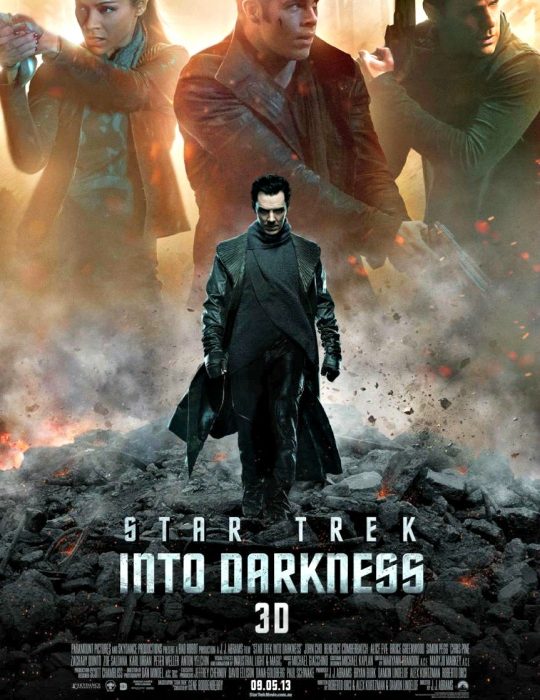 To many, the original Star Trek is science fiction epitomised. That’s not because it looks or sounds the prettiest (moderate budget television in the 1960s didn’t get you very far in this regard), it’s because, first and foremost, Star Trek has always been about ideas. The idea of a united Earth working together to explore the unexplored is enough to make you look past the silly sets and polystyrene rocks. Though there have been four subsequent TV series (including one animated one) and 11 films, all with hugely increased production values, none (perhaps with the exception of Wrath Of Khan (1982)) have captured the awe-inspiring simplicity of Gene Roddenberry’s original vision.

Enter now, the 2009 reboot Star Trek which was sorely needed after the bloated and extremely average Nemesis (2002). Star Trek then represented a new start, not only literally but also emotionally: the chance to regain the sense of wonder at what humanity as a species could achieve that made the original series so special. Despite all the film’s faults (Chris Pine’s arboreal performance and the grossest misuse of lens flare in the history of cinema to name but two) it at least succeeded in this regard. Seeing Kirk, Spock et al. rally together in the film’s climax provided, however fleeting, a glimpse of the original series’ emotional punch.

The J.J. Abrams helmed franchise now faces the dreaded sequel. Now that all of the relevant protagonists are on the same page, can their united effort against a common villain, Benedict Cumberbatch’s John Harrison, be as compelling as all their internal squabbling was in the first (or 11th ) time round? Cinema goers as a species love origin stories, hence why so many superhero movies seem to get rebooted every decade or so, so it will be testament to Into Darkness’ greatness, or lack thereof, if it can keep their collective attention held.

Well what does the trailer promise us? One thing that will stick out to most is Cumberbatch’s slimy, emotionless villain. Cumberbatch is one of the most consistent British actors working today so the time feels right, what with him being both Smaug and Sherlock and all, for a star-making role. Tom Hardy had Bane, hopefully now Benedict Cumberbatch will have John Harrison. Certainly his unflappable coolness and hate-filled baritone will make for an emotive performance (I don’t think I will ever get sick of hearing him contemptuously utter, “I will walk over your cold corpses”).

However, one of the more promising aspects of the plot is that the majority of the conflict seems to take place on Earth or at least in its orbit. This may not sound like a big deal but it does birth an interesting dynamic: when the USS Enterprise has explored the farthest stretches of the galaxy, what does it mean when their home is under attack? This trope is slightly overused, to the point where one can’t help but think it analogous to how all movies based on sitcoms feel the need to go to a foreign country, but the intrigue is still undeniable. In fact, this sums up my feelings to any new Star Trek movie: even though I’ve seen it all a thousand times before, I will always be back for more.