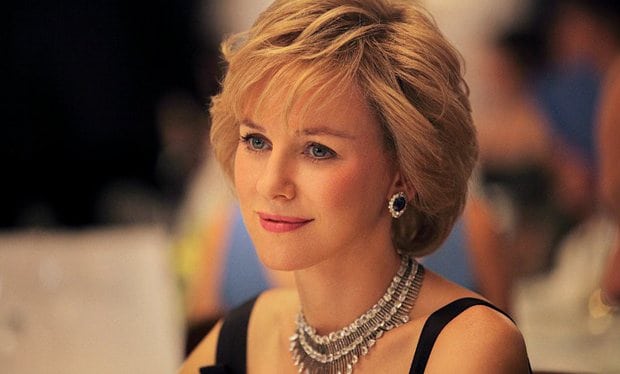 I got a feeling, before seeing it, that Diana wasn’t my sort of film. Nevertheless it is the role of the critic to enter the cinema with objectivity, making sure bias is left at home and assumptions are locked out. Besides, how easy is it to write a bad review? In fact, wouldn’t it be great if I could write a really nice review, waxing lyrical about its gorgeous cinematography and the fantastic lead performances. That would be really great.

Diana is probably the worst the film of the year and may feature one of the worst screenplays of the decade. It is a fantastic example of condescending, arrogant and head-achingly dull filmmaking. The script reads like a mind map, with the words “Stuff Princess Diana might have said/done” written in a circle in the centre. The writer, Stephen Jeffreys, seems to have simply strung a series of bizarrely staged moments together, that Naomi Watts’ stale Diana floats through like a helium filled angel. The dialogue serves horrifically apparent functions in every scene, always opting to directly state the most obvious meaning of any moment. “I just want to help people” Diana pouts in the back of a car, before getting home and telling all of her staff they can “go home for the night!” She then proceeds to make beans on toast. So she wants to help people, but she also likes beans on toast? I suppose that makes her amazing and benevolent but also really down to earth and ordinary like me? I love beans on toast!

Yet even this criticism borders on crediting the film too much, for all its attempts to spell out Diana’s wonderful character, it actually manages to make one of the most beloved national figures in history seem pretty self centered. Yes, there is all the Jesus Christ meets Marilyn Monroe posturing, but ultimately the film is concerned with her loneliness and attempts to be with the heart surgeon, Hasnat Khan, whom she considers her true love. Whilst, in truth, that may have been a time of huge anguish for the Princess of Wales, the onscreen relationship seems so disingenuous  and contrived that any tears shed over it seem equally fatuous. Diana hardly even mentions her children (who feature once for 6 seconds), is always looking in the mirror, and consistently courts the press who hounded her so much. Possibly this was an attempt to portray a multi-faceted woman under great pressures, trying to simultaneously live with and fight against the position that defined her. This attempt failed.

Maybe these all sounds like cheap shots against a film that clearly is not trying to reinvent the wheel. However, my issue is that the film isn’t trying to do anything at all. It seems that the creative team behind the project assumed that by making a film about the ‘People’s Princess’ and printing posters that used the same font as Stephen Frears’ far superior The Queen (2006), accomplishment was somehow guaranteed. Instead the failures of Diana prove that trying to simply profit from a national tragedy, blindly retelling well known history, is lazy and in this case borders on emotional manipulation. This film, at best, added nothing to Diana’s legacy and categorically did not need to be made.