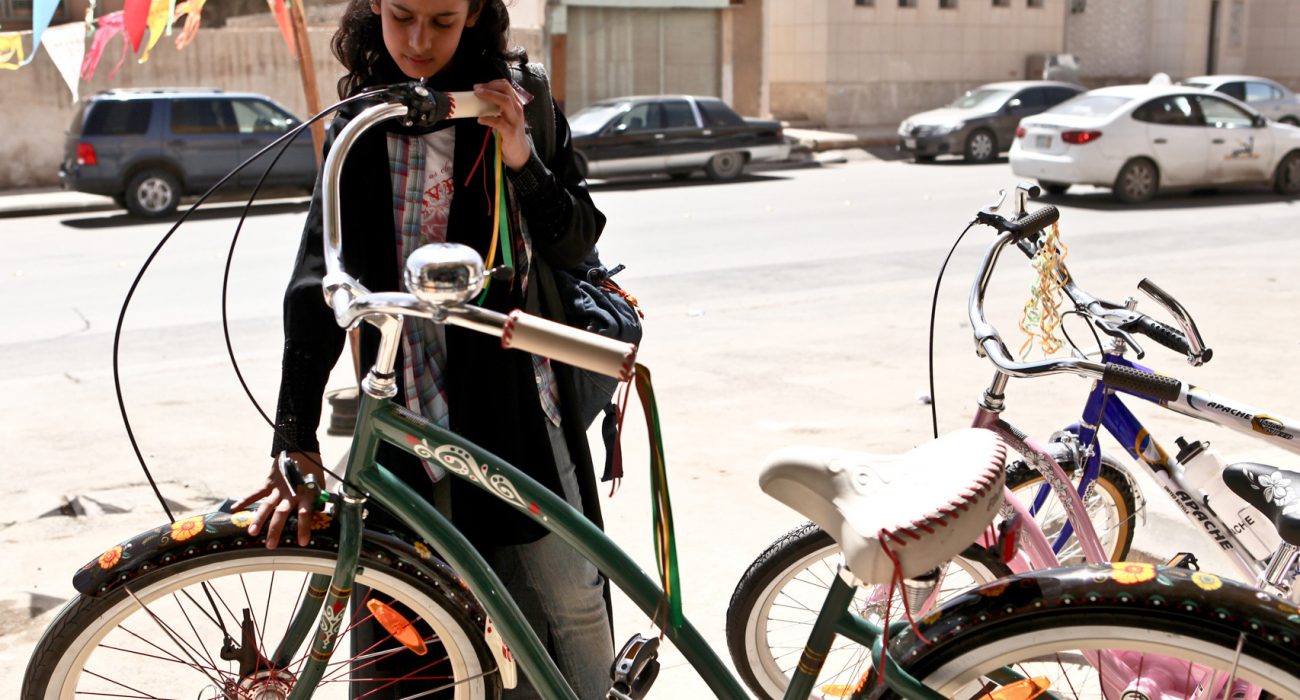 Wadd Mohammed as the title character

Recently, we have witnessed the emergence of Middle Eastern cinema that flips the lens onto the female subject, powerfully conveying the positions that women hold under the Islamic Republic. In particular, Wadjda hit British cinemas in July 2013 and marks a watershed moment, producing the first ever Saudi film directed by a woman – Haifaa Al-Mansour.

In subtle and unlabored terms, Wadjda exposes patriarchal values that underpin female disempowerment. We see Saudi culture through the eyes of Wadjda (Waad Mohammed), a ten-year-old girl whose all-female school exhibits a globe at the back of her classroom, highlighting that as a young Saudi woman even Wadjda’s ability to move around her hometown is limited.

Wadjda makes some headway towards achieving small personal freedoms. She takes pride in wearing Converse trainers under her burqa which pierce the uniformity of her appearance. This seemingly insignificant win, for which she must assert herself in the face of vigilant female elders who police other women’s appearances, prompts Wadjda to act on individual thought and desire as we follow her onto her next venture to acquire a bicycle.

Central to the narrative is a broader comment on women’s freedom of movement in Saudi Arabia. Even if Wadjda is able to defeat convention and ride a bike, as a Saudi woman she will not be allowed to eventually upgrade to a car, limiting her agency to the confines of the domestic sphere. Wadjda’s determination is moving but holds tragic implications when considered in relation to her mother who relies on male drivers and suffers her husband’s abandonment. In a final shot where Wadjda cycles down a road which meets a highway in the distance, the film points to the fickle nature of Wadjda’s achievements which delude her into thinking she may continue to strive towards achieving her goals.

When censorship rules loosened in the West in the early sixties, Hollywood placed the female form at the centre of its gaze, fetishizing women’s bodies to the extent that a woman’s image can barely exist on screen without being sexualized. Filmmaker Peter Gidal refuses to show images of women in his films, stating: ‘I do not see much hope for representations of women’ as he cannot see how ‘there is any possibility of using […] any image of a woman other than in an absolutely sexist and politically repressive patriarchal way’ – The Cinematic Apparatus.

Contrary to Gidal’s position, Wadjda – together with other Middle Eastern films like A Separation (2011) – situate women at the centre of the narrative, presenting a heightened mirror of our own gender constructs. Al-Mansour’s stark depiction of patriarchal privilege raises awareness about women’s rights in the Middle East but, equally, she grants the Western viewer the opportunity to develop a critical lens towards the oppressive images that dictate our value systems and produce gender inequality in less obvious ways, such as in the ubiquitous Bond films.

In the opening scene of Skyfall (2012), for example, the female heroine drives Bond out of a sticky situation and brings him to safety. Compared to Wadjda’s mother, this is a woman with serious agency. But while some women may sit snugly at the wheel, others are subjugated to male will as Bond’s other lady-interest is a powerless sex slave and an object of exchange between men. Like most box-office hits, Bond films are packed with fast-moving action whereas Wadjda is pared down and takes a slower pace. With an uncluttered window into a young girl’s life in Saudi Arabia, Al-Mansour equips her audience with practical ways to pin down patriarchy and – for the sake of the next generation – to ramp our critical faculties up a gear.