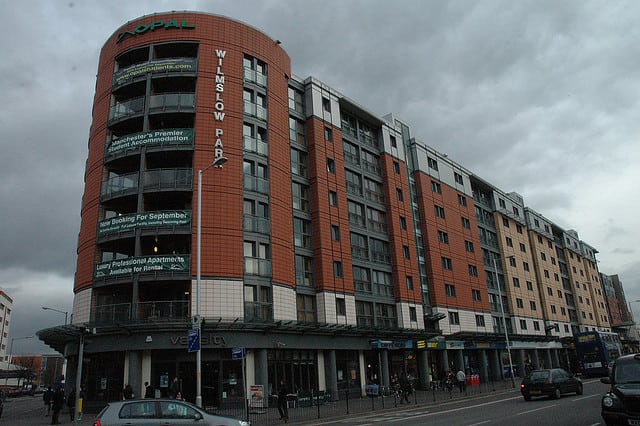 Over 1,000 students were evacuated from their hall of residence last Monday after a kitchen fire broke out.

After one student left a frying pan unattended during a late night cooking session, Fire and Rescue teams were called to Manchester Student Village on Lower Chatham Street at 2.58am.

The fire fighters managed to contain the blaze in the private halls sixth floor kitchen and used a special ventilation fan to clear smoke from the property.

No-one was hurt as a result of the fire but it did cause significant damage to the communal kitchen and caused smoke damage to the rest of the floor.

Councillor David Acron, Chair of Greater Manchester Fire and Rescue Authority, has put out a plea for students to stay safe while cooking.

“Every year our crews deal with a spate of cooking fires when freshers come to Manchester.

“Leaving home and beginning to look after yourself is an exciting time, but please take care.

“It’s easy to get distracted when cooking – that’s when a fire can begin with devastating consequences.

“Always stand by your pan or better still if you’re on your way home from a night out stop at a takeaway.”

Nick Lake from MCR Students, the group which run the halls, praised the quick response of staff working during the night the fire broke out.

“Our facilities team responded as required, raised the alarm and carried out a textbook evacuation.

They deserve credit for their professionalism and it highlights the need for residents to take fire safety more seriously. MCR Students works closely with GMFRS to ensure the risks to residents are reduced and its properties are as safe as possible.

The damage was restricted to the one kitchen, with smoke damage in the apartment hallway. Testament to the construction of the building, the actions of our team and the quick response of GMFRS.”

Monday night also saw residents evacuated from Wilmslow Park halls of residence after a smaller fire broke out there.

For a free Home Safety Check, which could include the fitting of smoke alarms please call Greater Manchester Fire and Rescue Service on 0800 555 815 or visit www.manchesterfire.gov.uk.