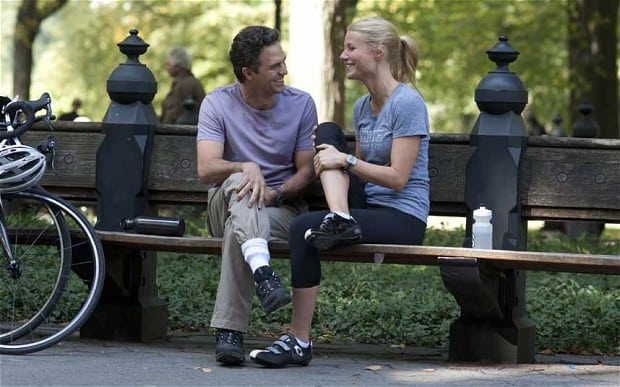 Review: Thanks for Sharing

Walking into this film, I could only feel the pang of dreaded anticipation over the prospect of seeing a Hollywood rom-com about sex addiction. The trailer paints the style in the realm of Hitch or Along Came Polly, and while I am no stranger to the indulgent pleasures of a glass of wine,  too much ice cream, and a frothy movie; the prospect of seeing a film which earnestly tackles the subject of addiction whilst starring P!nk and having gags such as a fat bloke falling off his bike, is not one which sits comfortably. To its credit, the film is much more mature than its trailer suggests: it has multiple character arcs which go through various motions of the experience of dealing with addiction, and is not afraid to spend time with the more uncomfortable aspects of its psychological reality. Yet the film still has its feet entrenched in two territories which do not mesh well, as it retains the more indulgent demands of Hollywood reality where no character is more than one cathartic scene away from complete resolution, which usually involves a “meaningful” glance followed by hugs all around.

Everybody is pleasant in this film. Mark Ruffalo brings effortless charm to his character struggling to maintain the equilibrium required for five years of sobriety, whilst P!nk proves she can act perfectly inoffensively, and Tim Robbins is a pleasantly watchable unpleasant father. This is the problem with the film, as there’s no tone to watch it through which sits satisfactorily. The subject matter is far too heavy to be able to drift away with the comedy or melodrama, as each scene revolves around an aspect of struggling with sex addiction, and does so with serious intent. Two men sitting in the audience with me laughed their way through a scene which involves one character’s relapse shifting into another’s oedipal complex. The scene wasn’t funny, and as one character turned suicidal, as did the expressions on the two men who, popcorn in hand, didn’t know how to react for the rest of the film. I can’t say I blame the pair, as there’s a lightness of tone and touch to the comfortable conventions and plots which jars the scenes which declare a more serous “issue movie” sentiment.

The film dips its way into dealing with the taboo aspects of sex addiction that we haven’t found in most Hollywood films, but you’ll leave the cinema about as enlightened on the subject as you would have been from reading a Heat, or Nuts magazine article, as the narrative is far too eager to return to comfortable resolutions of Hollywood tropes to allow any problem to linger beyond a quick fix. One character actually learns to free himself through interpretive dance. After a night of that, with standard exorcizing of bad memories in a burning bin which conveniently overlooks Manhattan’s skyline, he’s coping much better. I would like to say that that last sentence was a spoiler, but there aren’t spoilers in the latest line of romances which are coming out of Hollywood. The romantic side of the film is state of the genre, warm clichés riddle the relationship arcs that pepper the film, and just as you may think the film is making an interesting decision, it either forgets about the implications raised in the mentioned oedipal scene, or all is resolved by a loving hug. The treatment of problematic aspects is too emotionally neat, and contained in the conventions of modern Hollywood romances to provide any real conviction that these characters are real. Everybody’s hair is perfectly in place, they all live in impossibly nice homes and no one’s clothes have seen more than a day’s wear. I would applaud any film which subverts the expectations of genre or convention, but Thanks For Sharing is far too comfortable in its willingness to make it a pleasant experience for it to be able to say anything effectively, or entertain the audience satisfactorily.