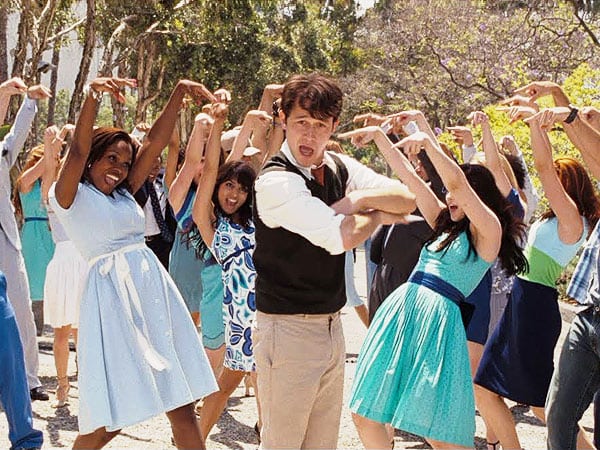 Top 5: Musical sequences not from a musical

SPOILER ALERT: Predictably, the film closes with protagonist Steve Carell finally losing that burdensome cherry at the ripe old age of 40. He proceeds to celebrate said coitus with the lads in a fun fantasy musical rendition of ‘Aquarius’/’Let the Sunshine In’.

In another Judd Apatow classic, Ron Burgundy and the gang explain to us the meaning of love with a spontaneous barbershop quartet performance of ‘Afternoon Delight.’

Life is beautiful, you’re in love, and the only logical way to express your joy is through the medium of Hall and Oats. We’ve all been there. Only Joseph Gordon-Levitt has a flash mob to help him celebrate his recent hook-up with the beautiful Zooey Deschanel.

In a darkly comic scene that could only be the brainchild of director Tim Burton, the guests of a dinner party, hosted by the Deetz family, become possessed by the ghosts of the recently deceased Adam and Barbara Maitland. Wanting to scare the living inhabitants out of their old home, the Maitlands take control of their bodies and groove to ‘Day-O (The Banana Boat Song).’

There’s something about Queen’s ‘Bohemian Rhapsody’ that makes the urge to rock out literally impossible to suppress. Topping the list is the opening scene of Wayne’s World, the ultimate car ride sing-a-long that has everybody watching head-banging and air-guitaring with them.