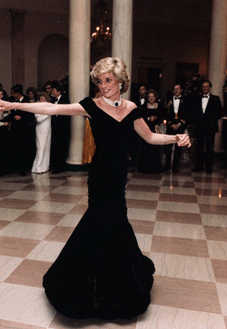 The evolution of a Fashion Princess

Love her, loathe her, or feel mildly indifferent to her, Princess Diana’s status as a style icon of the 1980’s and 1990’s is indisputable. Yes, there was scandal surrounding her marriage, and yes she did a lot of good, but Princess Diana will also be remembered as one of the most influential women in fashion in the twentieth century. However, her evolution into one of the most fashionable women in the world was by no means immediate or effortless. Lady Diana Spencer was a tender nineteen years old when she got engaged to a future King . Most of us are trying to navigate our own sense of style at this age, without having to deal with perhaps the scariest in-laws in the world and millions of onlookers. So the People’s Princess can be forgiven for a few frumpy outfits in her early days. As her former stylist Anna Harvey said ‘Diana started off being really safe with her style, it was all very Laura Ashley’.

It wasn’t long before the Laura Ashley look was replaced by something all together more risqué. As her confidence grew, her style developed into that of an international celebrity, she was elegant, sophisticated and completely in control of her image. She was also sexy. Sure, there were no bum-cheek revealing hot pants, or midriff bearing crop tops that you might see on a twenty something these days, but this was the 80’s and 90’s and she was a royal. Princess Diana often wore more traditional royal get up, such as velvet and feathers, but with a more modern twist of a one shouldered style, or a dress with a completely open back. In the later years of her life she was known for wearing killer cocktail dresses, often designed by her good friend Gianni Versace.

Princess Diana was also incredibly shrewd in understanding the impact of what she wore and using this to her advantage to send a message to the press, the public and the royal family. In 1994 Princess Diana wore a now iconic, off the shoulder, figure hugging little black dress to the Serpentine Gallery benefit. This was on the same evening that an explosive documentary about her husband’s infidelities was airing. The next day every paper did not have the Prince of Wales’ confession on their front page, but rather a stunning, confident looking Princess. It became known as ‘the revenge dress’. However, in keeping with her philanthropic nature, Diana auctioned off that and many of her other dresses for charity just two months before she died.

Princess Diana was always a great supporter of the British fashion industry, through wearing designers like Catherine Walker and Zandra Rhodes, she always aimed to promote British business,  something we can see her Daughter- in- law Katherine Middleton has replicated.

Although her life came to an abrupt early end, her legacy lives on in a multitude of ways, perhaps most frivolously in the world of fashion.  It was only last week that a very modern style princess, by the name of Rihanna proclaimed Princess Diana to be her style inspiration and that she was ‘gangsta’ – a title, you can imagine, the real Princess might have smiled at!