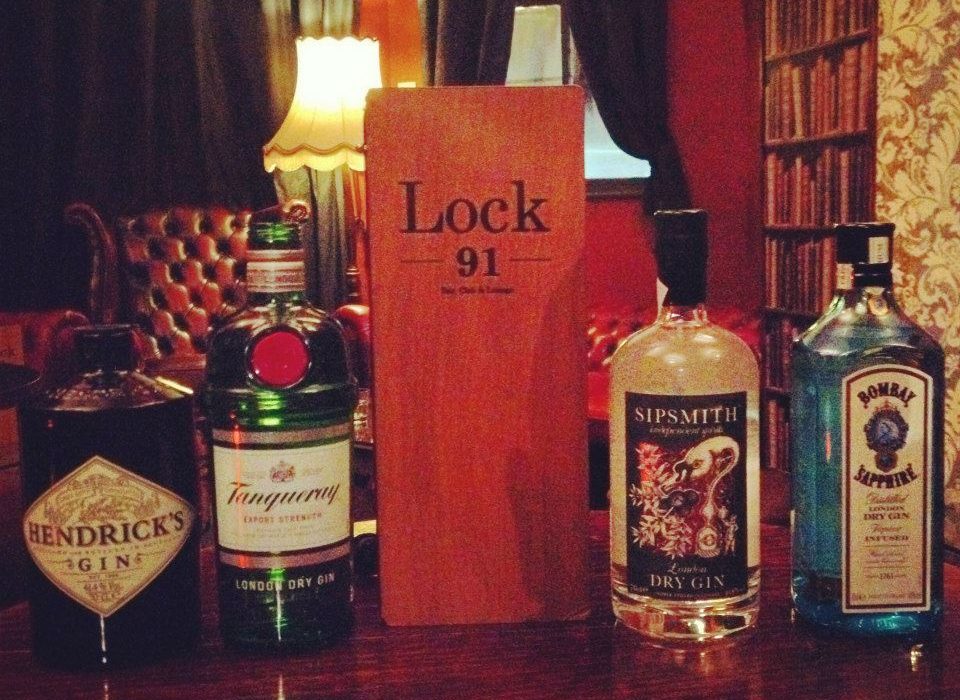 A Gin Tasting Night at Lock 91

Dave Marsland, better known as The Drinks Enthusiast, is a great bloke. Warm, engaging and funny, he keeps the room laughing and heckling throughout the evening at Lock 91. He describes himself as a “Taster & Guide to the World of Drinks”, and for £15 you can spend the evening trying out four different spirits, and learning their history. We went to the gin night, where Bombay Sapphire, Tanquaray, Hendricks and Sipsmith were on offer, each being described and tasted in turn.

The history of gin is genuinely fascinating. Most people have heard it described as ‘mother’s ruin’, but Dave traces its history right back to an early version of the spirit was supposedly drunk by soldiers from the Netherlands during the Eighty Years War, giving birth to the term ‘Dutch Courage’. From there it was brought to England, leading to the Gin Craze where by 1743 the British drinking 10 litres (!) of gin per head each year. While clearly never reaching such dizzying heights of popularity again, gin drinking has definitely had a resurgence in recent years, with its image rehabilitated from seeming like and ‘old man drink’, even becoming the tipple of choice for hipster-types for a while.

Dave’s enthusiasm when talking about all of this is fantastic, and he really made me want to find the tasting notes he was talking about in each of the gins. Unfortunately often all I got, in all honesty, was the overwhelming burn of alcohol and an aftertaste of nail varnish remover. This is clearly partly due to the failings of my palate, but I did think that it was a little much to be expected to drink four neat shots of gin in succession. The people around me pulled an interesting variety of faces as the night went on, and I saw more than one group quietly push their second or third glass to the side after having a sniff of its contents. Personally, I’d have liked to be provided with some sort of mixer, maybe a bottle of tonic on each table, for once we had tried a sip of each different gin.

Despite struggling with this part of the evening, I am definitely a huge gin fan, and after the tasting I really enjoyed the four delicious and potent cocktails we were given, each using a different gin we had tried. The guys at Lock 91 really know what they are doing here, using gin in various drinks including their take on a martini (Chambord, Sipsmith gin and vermouth – a grown up drink that was incredibly strong and not too sweet), and the deliciously sweet Lemon Sherbert (Tanquaray, limoncello, orange liqueur, lemon juice and vanilla). They made a great end to the night and had us walking home along Deansgate Locks really quite tipsily.

Overall therefore I would pronounce the night a qualified success. We all had a great time, warming to our host and the company, but I do think there are slight changes which would make the event even better. But of course, everyone’s palate is different, and there were definitely some tables knocking back the neat gin like there was no tomorrow! And while not an expert, I’m now definitely much more qualified to ramble on pretentiously about the history of gin, which is clearly a vital life skill and one for which I am very grateful to Dave.