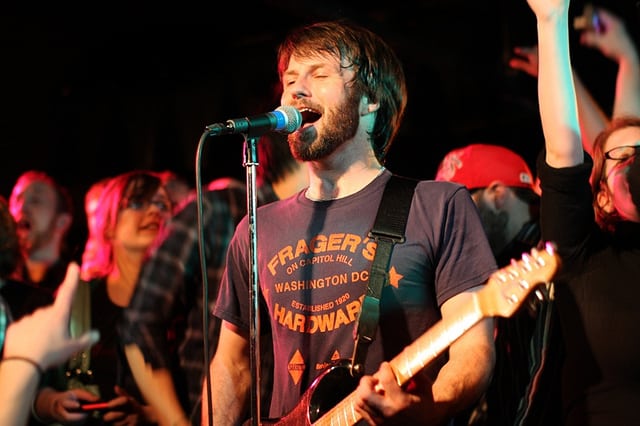 The Dismemberment Plan never got much recognition this side of the Atlantic, despite releasing some of the most original and exhilarating music of the last 20 years. They’re a beloved cult band, and their set at Manchester Academy 3 felt like a love-in for fans after waiting 12 years for their return. Comeback album Uncanney Valley doesn’t quite live up to the band’s legacy but it has its moments. It’s full of slightly ditzy pop songs, including one about Brian Eno’s dad. Their best music relied on the kind of urgency and anguish that fizzles out with age, which might explain the lighter punches thrown by the new material.

But as a live act, it’s like they’ve been cryogenically frozen in waiting for this comeback (scientists can’t do that yet but still). They’re back to their old selves: screwing with time signatures, throwing odds and ends into the mix – they fuse snippets of Lorde’s ‘Royals’ and The Smiths’ ‘That Joke Isn’t Funny Anymore’ into breakneck-punk number ‘Ok, Joke’s Over’ and somehow pull it off. It’s refreshing that The Plan are as intense as ever despite the fact that they’ve all settled into family life and ‘grown-up’ professions (drummer Joe Easley just so happens to work for NASA now). Frontman Travis Morrison still has his boyish charms, and the band members have hardly aged a day since their split (excuse the sweet talk).

Morrison’s vocals straddle the divide between hip hop and nerdy white boy rock, as he writhes and contorts to spit out a hundred words a minute on ‘Back and Forth’ and ‘Girl O’Clock’. Bass lines wriggle around off-kilter drum grooves on ‘The Other Side’. The choruses of ‘You Are Invited’ and ‘What Do You Want Me To Say?’ send the crowd into total euphoria. Keyboards fizz and bleep on a run of new songs, which sound a lot better live and steer clear of a mid-set lull. To end the night, as is the D-Plan tradition, the audience are invited onstage for ‘The Ice of Boston’. One guy got so excited he jumped up there and tripped over the microphone lead. What a dumbass. That definitely wasn’t me.