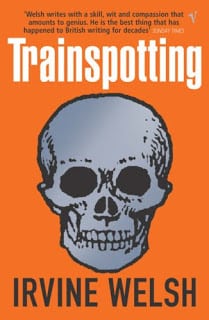 Trainspotting is the controversial first novel of Scottish author, Irvine Welsh. Set in the late ‘80s, it exposes us to the world of Edinburgh’s underclass antihero, Mark Renton, and his group of hedonistic and heroin addicted friends. The darker side of their Scottish psyche is peeled back, revealing complicated and controversial issues: HIV/AIDS, nationalism, abortion, the dole, heroin. Despite failing to reach the same level of mainstream success as the film adaptation directed by Danny Boyle, the book is a cult classic and critically acclaimed.

Admittedly, at first it isn’t a ‘fluid’ read. There is something awkward about reading the phonetic Scottish dialect. I mean, God help any foreign language students. Trying to get your head around passages like “ah whip oaf ma keks and sit oan the cold wet porcelain shunky” is a challenge for native English speakers. Yet it is well worth the effort; the ability to ‘read Scottish’ will become second nature after a while. It does add so much depth and character: you can hear them talking in their gritty accents as you read, making Trainspotting hard to put down.

What is interesting about Boyle’s adaptation is the way he manages to capture the zeitgeist of the ‘90s, which is less clear in Welsh’s work. One reassuring correlation between Boyle’s films is his ability to pick the right songs for exactly the right moments, changing the way you perceive and remember the scenes completely. I love the scenes featuring ‘90s britpop band Elastica: Justine Frischmann’s seductively gritty voice flows effortlessly around the shenanigans of Mark Renton. Altogether the soundtrack really epitomises the early to mid ‘90s music scene from the underground androgyny of Elastica to then club royalty Underworld. Boyle simply sums up a time and a place through good music, good directing and good casting.