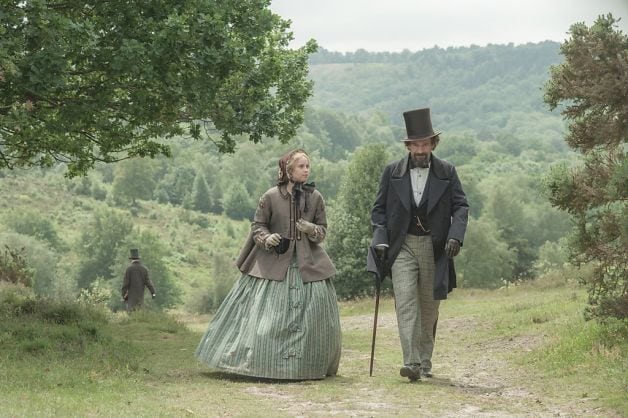 With his second feature as director, Ralph Fiennes has comfortably established himself as a highly talented cinematic presence both in front of and behind the camera. Like his previous film, the adaptation of Shakespeare’s Coriolanus, Fiennes’ film making is as dramatically powerful as it is intellectually stimulating, elegantly moving through impressionistic devices in the cinematography, combined with powerful emotive performances which never seem to imply an egotistic desire behind the bravura of his style. Yet it would be a mistake to construct the success of The Invisible Woman as one attached around the figure of Fiennes, as Abi Morgan’s subtly complex screenplay, and Felicity Jones’ superb performance as the central Invisible Woman both serve the film’s haunting achievements in its portrayal of Nelly Turnan’s relationship with Charles Dickens.

The film’s structure concerns Felicity Jones’ Nelly Turnan coming to terms with her relationship with Dickens. Mimetic of the process of memory, the scenes flow over the process through which the young actress becomes a mistress of sorts to Ralph Fiennes’ already famous Charles Dickens. Whilst the story is interested with probing elements of the great writer’s life and work, the real interest is on the effects he had on others, of the distraught caused by the lack of love with his wife, and the tumultuous ramifications of a relationship on the verge of public scandal.

The recurrent evocation of turbulent waves support in an appositely Dickensian fashion the theme of repressed desires, and emotional experience coming to surface in memory – implicitly recreating the motifs and themes of Dickens’ own work. The style is in the realm of the writer’s thought, but is devoid of any resemblance of his sentimentality. From the perspective of the female side, the tensions of the love affair have high stakes in what it could mean for the future of a young woman (Turnan was eighteen when she first met the forty-five year old novelist), and the film exists in a constant state of anxiety of which Fiennes’ Dickens is never fully aware of.

The Invisible Woman is a film in which the acting is superb throughout. Yet, credit must be given to the editing and the screenplay – many scenes have their endings coming to an abrupt finish where conclusions do not have verbal evocation, nor are tied up with satisfactory statements. So much is said by the performances of charged gestures, and telling glances that there is barely a sentiment over-stated. The film is about collecting the fragments of experience, and the narrative encourages the audience to do so on their own. If Fiennes as a director can keep assembling such talent and skill around him, then he has an illustrious career as interesting director ahead of him which could rival his acting reputation.