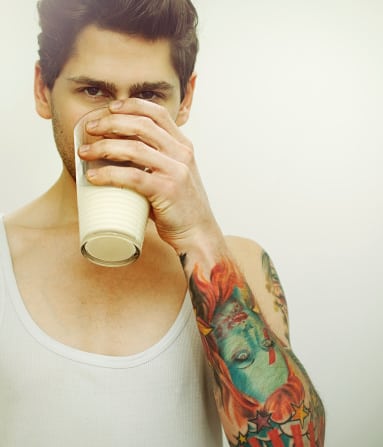 In 20 years time a new breed of men will emerge. These men will never sport a t-shirt and shudder at the thought of the gym. They will avoid holidaying in warm climates and refuse to visit public swimming pools. If this doesn’t sound like your ideal future husband, fear not. There is a way these modern men can be identified; their sleeve.

Once reserved for hard-core biker-boys and worthy workmen, the sleeve is now another accessory for the bearded, top-knotted creative crew at your local advertising agency. Even my hairdresser got a sleeve at the weekend. However, as the tattooed arm continues to gain popularity, the reasons behind this craze are becoming increasingly unclear. One may be the need for our generation to constantly express our beliefs. A tattoo is a permanent change to your body, so it should represent something you really believe in. Religious? Get a tattoo. Patriotic? Get a tattoo. Vegetarian? Get a tattoo. They give us an opportunity to show the world who we really are. For example, nothing says ‘fighter of the bohemian revolution’ more than a selection of dice, hearts and sepia faded flowers doodled down your arm. A sleeve represents an attitude to life; carefree, creative and generally cool. It gives us an opportunity to show our individuality and uniqueness. I can only imagine the joy someone feels from knowing that 25% of the UK’s population has something very similar.

Has the crave to be kooky turned into social conformity? Are all members of the 25 percenters really that individual? My experience has taught me that after the lure of an edgy sleeve has worn off, the man behind it tends to be more boring than the tattoo-free majority. It is the same phenomenon as that of a girl with short hair; they believe a ‘different’ haircut will give them an edge, whereas actually it just provides more entertainment to those playing ‘is it a he or a she?’ on the Megabus.

Don’t get me wrong, not all tattoos fit this category. It is socially acceptable to get a tattoo for sentimental reasons, just ensure strength in the legitimacy of these reasons. For example, I must admit there is a hidden hypocrisy to this article; I have a tattoo. It compromises of three dots on my ankle as if someone had written ‘therefore’ in shorthand. Very hipster. When asked for its relevance I used to tell people that it’s meaning of ‘ma vida loco’ lies in prison tattoo history. However, the truth is buried in a blurry alcohol stained memory of a Thai beach. Not so hipster, but a lot more believable. Similarly, I once met a girl who felt the urge to share with me her latest body addition; a heart with wings across her lower back. She then preceded to explain how the heart represented her troubled background, with the wings symbolising her struggled escape. This was, of course, complete pretentious fabrication. If you have a bad tattoo, admit it. As a result of a bet gone wrong, a friend of mine has another friend’s surname in ink across the sole of his foot. When asked, his explanation is that he is an idiot; believable, truthful and straight to the point.

Luckily, these tattoos are all able to be hidden. A sleeve, however, is guaranteed to provide far more difficulty in concealment when the inevitable regret sets in. Like most fashions, the sleeve is a fad. This fad will disappear in due time, but the evidence of it will remain. Once a symbol of rebellion to social norms, the inked-up arm is soon to be to the young man what the tramp stamp has become to the young woman. When the boy becomes a man and tackles responsibilities such as fatherhood and mortgage repayments, he may question whether he was ever that kooky and individual. With a pair of scissors and a blade the top-knot and beard can be dealt with. However, the sleeve will cling to its owners conscience forever, serving as a regular reminder of just how ordinary he really is. Oh, for a beach holiday.