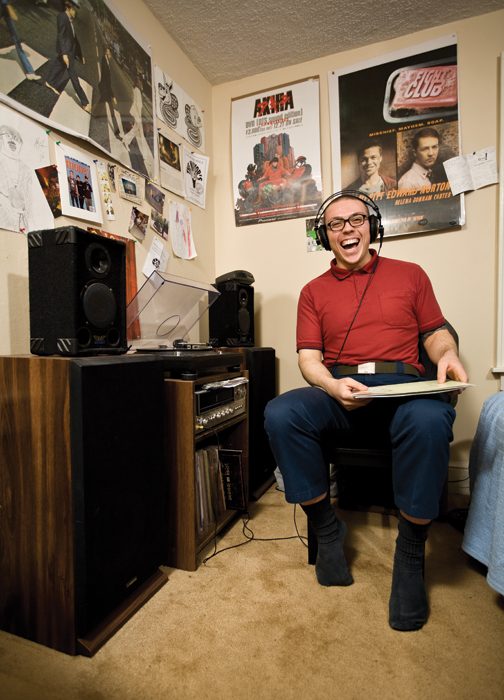 “Idiot, disregard them immediately! Walk away from them so you don’t have to hear their bull-shit.” The self-titled ‘Internets busiest music nerd’ Anthony Fantano addresses the rabble who have put forward the notion guitar music is moribund. “I think anybody saying that guitar music is ‘dying’ is an ignorant idiot; what the fuck does somebody who says that actually mean? Nobody would come out and say ‘Rock is dead’ because they would be looked upon as silly, but instead they just use this weird, vaguely technical, kind of covert term, ‘the death of guitar music’.

“There’s  actually quite a few very popular songs and records that came out this past year that featured guitars, like Daft Punk’s latest record, or even the new Avicii single ‘Wake Me Up’ had an acoustic guitar on it. What they’re essentially saying is that they don’t care for guitar music they prefer more pop, electronic, synthesized stuff or hip-hop, and that’s fine but to say guitar music is ‘dead’ because another kind of music is really popular is stupid.”

My own review of Arctic Monkey’s last record AM was pretty scathing; the main beef centred around the complete departure from their highly charged and exciting debut album, a comparison which I felt  had to be drawn. “You can’t escape context, no matter how much you try; I can’t stand people who are like ‘it’s unfair to compare past albums to the new albums’ – that’s completely ridiculous because an artist like the Arctic Monkeys would not be where they are popularity wise, success wise or artistically if they didn’t create those past albums. Even context side I would not like AM, it is the musical equivalent to a dry hump for a rock record – it’s no fun.”

“I was reluctant to review King Of Limbs because of the fan frenzy surrounding it. I like to review and listen to things at my own pace, for that record I was getting fans saying ‘review it now, it’s been out for 4 hours! Where’s your review?’ Sometimes I’m just not in the mood for certain artists and prefer to do them in the order I want; I put the Nicholas Jaar review first because I wasn’t ready to do Radiohead at the time.”

Neil Young recently launched his new music play Pono, claiming it would be “bigger than vinyl”, a perhaps unexpected comment considering the age and legacy of the veteran performer. “I’m pretty sure streaming services are more popular than vinyl right now, but from a revolutionary standpoint I’m not sure if any streaming service can become bigger than vinyl. What can one service do that another can’t? They’re all lining up to give you free music; I’m struggling to see how you can give music to people for free better than anyone else.”

“You could say the same thing about music reviewers possibly; there are a lot of reviewers out there – what makes my service stands out? Personally, I think the fact I do it on video, and I focus more on the sound of the music – along with a host of other things. Streaming services are all interfaces with buttons, I think the competition they should be having right now is to pay artists better, and the music streaming services that pay artists the best will be the ones that get exclusive access to the albums the artists are allowing them to stream.”

“I don’t know what it takes for bands to thrive today, certainly effective dissemination of their music on platforms like Bandcamp and SoundCloud. You have to be constantly coming out with new material until you have your hit, and then do your album – don’t worry about the album first. If you’re going to make more avant-garde, experimental and abrasive music just expect less, that’s all I can freaking say! There will be breakout artists, like Death Grips, but if you’re making Noise rock don’t expect to be in the same position as Coldplay five years down the road, make Noise rock because you love it.”

The Needle Drop, a b/vlog site with more than a quarter of a million subscribers and over 36 million views has turned Anthony into a music guru of sorts, despite this status he remains modest about its success. “The Needle Drop hasn’t taken off. I think there are fans and artists out there who watch it and they love it, which I appreciate, but I don’t feel like TND has become one of the major players in the music world yet. TND is relatively young and I’m not a point where I’m like ‘Expand! Expand! Expand!” It’s only been my full time job for a year and a half so I don’t really have the capacity to make it anyone else’s full time job”,

Fantano’s reviews manage to encompass the profound and the ridiculous all in one, largely thanks to his alter-ego, and occasional journalist, Cal Chuchesta. “He’s the Ren to my Stimpy; ultimately I would love for Cal to be in a made-for-TV Christmas movie called Cal Saves Christmas: The Origins of Chuchesta and The Hunt for The Golden Sweater –  if anyone would like to throw a director, cast and a whole ton of money at me to make this film happen, I will do it and allow it to be sponsored by Pepsi, Doctor Pepper, Ford, Chevrolet, Kia and anyone willing to sponsor this horrible, once in a lifetime film.”

Check out The Needle Drop at: