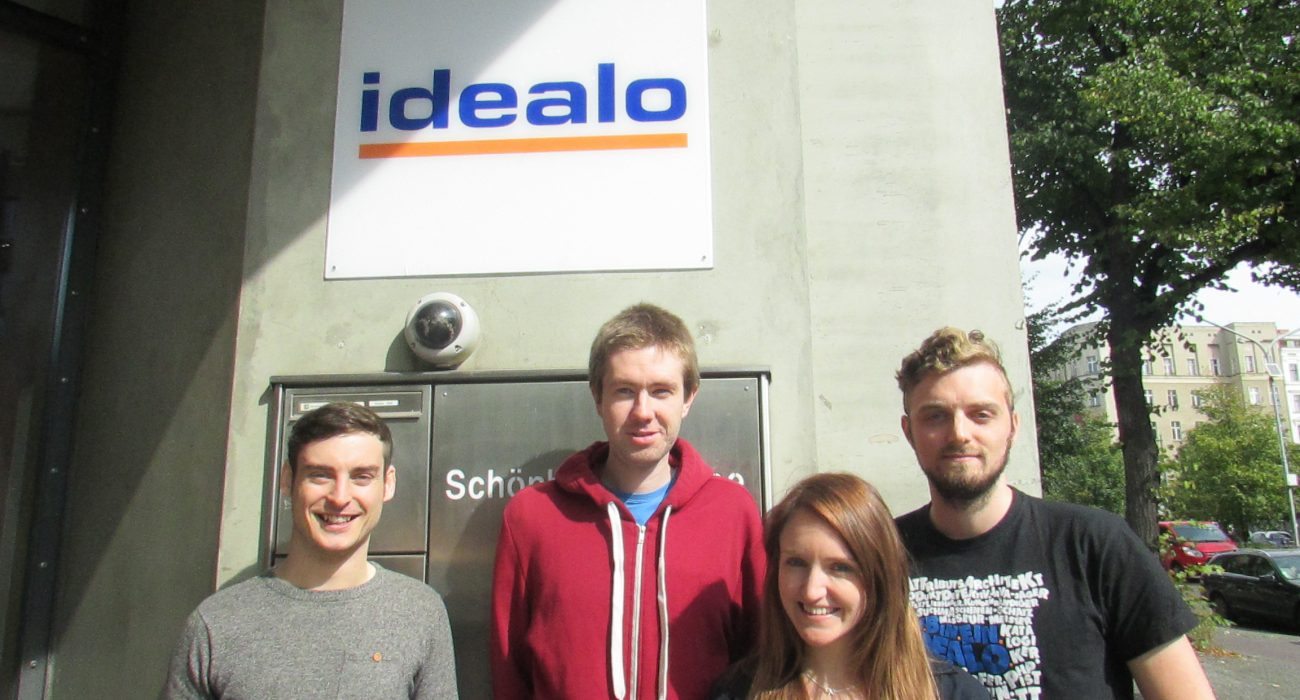 From Manchester to Berlin: Graduates now working at Idealo.

University of Manchester students are frequently told that they are desirable to companies all over the world. Four Manchester graduates making waves in the Berlin tech scene share their experiences of working at idealo—Germany’s largest price comparison portal.

How did you find out about idealo and your current job?

KP: I was already living in Berlin and had just finished an internship in online marketing for another e-commerce portal. A friend whom I knew from my year abroad in Vienna was working for idealo already and told me I should apply because they give you free breakfast and flexitime—that was enough to tempt me.

SR: After moving to Berlin, a friend who also happens to be ex-Manchester University started working at idealo and after she mentioned that they were looking for new recruits, I applied via the job advert on meinestadt.de

Tell us a bit about your present role and responsibilities.

SG: My present role is a software development role within the idealo Reise [travel] department, working solely on the Hotel price comparison engine product in a small and close-knit team. So far, in my first three months I’ve already contributed to a responsive design rebuild project, geospatial data/mapping and product search systems.

KP: My role is within both the Marketing & Editorial departments and focuses on researching and writing market analysis studies for our e-commerce blog. I am also the PR/social media contact for the UK site and liaise with journalists and other sites.

SR: My main role over the three years I have been at idealo has involved processing and correcting the data that appears on the website. I am also responsible for replying to customer issues via email and translating new, soon-to-be-incorporated developments from German to English.

How has your Manchester degree helped you in getting where you are today?

SR: My degree in German and French at Manchester University developed the language skills that I had already acquired at secondary school, thus giving me a huge advantage in job markets within German and French speaking countries. In particular my year abroad which saw me living in both Bavaria and Quebec prepared me for a career outside of the UK, meaning moving abroad was not as much as a big deal to me as it would be to your average UK citizen.

OW: The language skills from my degree have certainly opened a lot of doors for finding work and living abroad. In addition the analytical method learnt in Manchester and during my master’s degree has helped in problem solving on the job.

Why did you take the decision to leave the U.K. after graduation?

SG: I continued to work in Manchester for six years after graduating before taking the plunge to leave. Primarily, a better quality of life. Occasionally nostalgic flashbacks remind me of the good times ‘oop norf’ (and the road cycling in the Peak district).

KP: Having studied languages, I knew that I was keen to get some more experience working abroad, and initially thought that I would spend a year here for my internship. After that year, I realised that Berlin’s tech scene still had a lot more to offer me, so I decided to stay.

How did you manage adapting to life in a different country and city?

SG: Ask that question in one year’s time! I’ve only been in Berlin for three months so I’m still adapting. Without a decent level of spoken German one will forever feel like an outsider in German society. For me, this is the first experience living permanently in another country. Undoubtedly, the first six to nine months are the most difficult (if you cannot speak German) so persistence and a good sense of humour really help.

SR: I soon began to feel at home. It helped that I already had friends in Berlin (again many of whom were ex-Manchester University students—at one point there were eight students from my degree course all living in Berlin), although the main reasons for experiencing such an easy transition were the ease of finding a job, my previous experiences during my year abroad and my ability to speak German.

What was your level of spoken German like before you moved to Berlin?

SG: Rudimentary. I took a three-month, one class per week introductory German course (A1.1) at the Goethe Institute at Manchester University last year, where I learned the fundamentals of the German language. When I arrived in Berlin I could only introduce myself, say my age and tell people where I came from, and comprehend some written and spoken words, which, in truth, is fairly useless. Now I can speak and write German at a basic level. You learn quickly.

SR: The time I had spent in the UK learning French and German meant that I was able to communicate and get by without any major problems. If you have the solid foundations that a language degree provides you though, you quickly improve when immersed in a German-speaking environment.

Would you ever consider moving back to the UK?

SG: Not unless there is major political and cultural shift to affect the quality of life. Or, at least, not for a few years. I need a break from England.

KP: I definitely wouldn’t rule it out, as there are many things the UK has to offer that Germany doesn’t but at the moment working here is much more interesting for me.

SR: After almost four years in Berlin, I still enjoy everything it has to offer. Things such as the ease of getting around and living costs are more advantageous in Germany than the UK. That said, I still haven’t ruled out moving back to the UK at some point in the future, but in the short term, I have no motivation to leave Germany.

What advice would you give students who are in their final year and unsure about what they’re going to do next?

SG: Don’t believe that you must migrate/return to London for a career.

KP: Don’t restrict yourself to jobs and further study in the UK. There are lots of training schemes, internships and entry-level roles as well as post-graduate study options further afield in Europe and beyond. I’m glad I chose to move somewhere new straight after graduation, because its a time when you have fewer ties and you’re completely free to try something new.

SR: If you have the flexibility, moving abroad, even if only temporarily for the experience, can be very rewarding. In most major cities there are plenty of expats too, which makes it easier to make friends, especially if you don’t speak the language, although of course, making the effort to learn at least the basics will be of huge benefit.

OW: Very few people have a clear plan about exactly how they want their career to pan out when leaving university. Look for the kind of work that you think will interest you for years to come. This way you will enjoy your work every day and come out with a skill set that allows you to progress in the industry.

For information about working at idealo check out: http://jobs.idealo.co.uk/

Let’s Get Away: Edinburgh