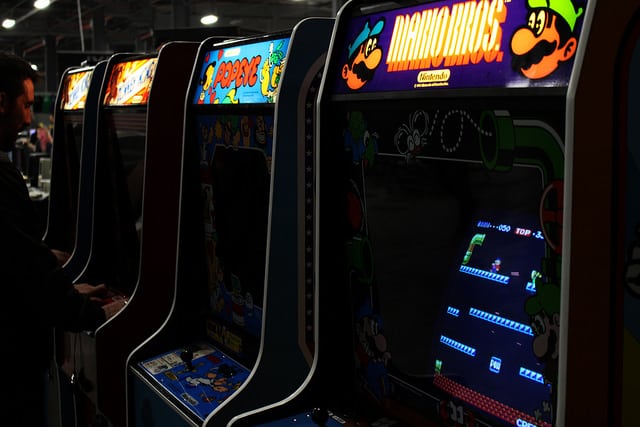 I approach the queue beside EventCity with doubts. Two hundred people are stretched around the perimeter of the huge warehouse space, rubbing their hands together and huddling for warmth, and worryingly they all appear to be wearing normal clothes. Is this really a group of gamers waiting to get into a gaming exhibition, I ask myself, and if so, how did they manage to crawl out of their piss-ridden hellholes at such an ungodly hour on a Saturday morning? Skulking to the back of the line, I scan for signs that tell me I’m in the right place. The signs are mixed—one girl is clad in a yellow vest-top, denim shorts and red braces, so she is surely cosplaying as Misty from Pokémon, a good sign, but others nearby are in smart-casual wear and none of them have their heads buried in handheld gaming systems, which is a little disconcerting. Nobody is even talking about games, so my sense of alienation is acute. I feel like a headlouse that has accidentally alighted on Greg Wallace’s shiny nut, fidgeting and panicking about in search of a more salubrious barnet.

Before resorting to the horrible option of verbal inquiry, I take a final peek over the shoulder of a tall man in front of me in the hope of uncovering a vital clue when, lo and behold, a most nerdy and fanboyish scene unfolds in the queue. As a female attendant walks down the line, checking everyone for their pre-paid tickets, she is rudely put off her stride by a fourteen-year-old boy in a lab coat, who stoops across her path, places a knee on the ground, and then spits the words “for science!” at her face whilst forcing a home-made K’NEX Portal Gun to her chin. Normality has been breached. In the young teenager’s head, the performance is met with a resounding chorus of belly laughter and an overwhelming cheer of solidarity from the lungs and mouths of his gung-ho gaming allies, but, in reality, the moment breeds a short, excruciating silence as the crowd struggles to comprehend the meaning of the act, and this is then followed by cynical pointing, snickering and facepalming. We had collectively crushed his spirit and suppressed any future impulses he might have to be creative in public again. His expression was one of nihilistic despair. On the plus side, I now knew I was in the right queue for PlayExpo 2014.

Upon entering, I realised there was a stupid amount to see and do. The room had four football pitches’ worth of floorspace, all of it divided into sections with tables and tape, and all of it quickly filled by two-and-a-half thousand people. There were dozens of activities to participate in across the venue, which I’m obliged to list only fleetingly due to a lack of column inches. Hold your breath: there were developer lectures, PC and PlayStation 4 demos, iconic TV and film props for posing with, competitive fifteen-player games projected onto big screens, seemingly endless lines of free-to-play arcade machines and pinball tables, indie games developers showcasing recent projects with virtual reality, gaming markets selling posters, consoles, animes, hoodies, key rings, jewellery, cuddly toys, fancy dress, and just about everything else, card tables for competitions, giant-sized Gameboys, cosplay parades, YouTube celebrity signings, and rows upon rows of retro games consoles geared up for play. Enough to make your head spin.

It was the strong indie showing that I was particularly interested in. There I met Steven from PixelBomb Games, who was demoing the team’s labour of love, Beyond Flesh and Blood, a third-person mech shooter set in a dystopian Manchester. The game draws on Gears of War style combat elements but makes things much more fluid, giving players the option to jet-pack towards or away from enemies in environments that stress verticality and fast-paced movement. Steven told me the company is hoping to launch the single player component of the game on Steam next year, with multiplayer functionality in the pipeline post-release. I asked him which Manchester landmarks players could expect to find in the game, and while he couldn’t promise any missions set amid the university campus, he did confirm Albert Square, the Arndale, and Piccadilly Gardens as key locations.

Graphically the game was very impressive, considering the small size of the studio and the pre-alpha engine build, but I still felt compelled to question Steven on the unrealistic visuals in the demo, for there was a distinct lack of rain in Pixelbomb’s version of Manchester. We both gave way to a hearty guffaw in the wake of my supreme wit, and then he told me to go away and try the demo at home. You can test the demo out yourself by downloading it from the game’s official website, and you can rest easy in the knowledge that weather effects are to be patched in soon.

At the event I also got hands-on time with virtual reality. It wasn’t the mind-blowing experience I had been hoping for, but that was partly because there were no first-person games to utilise the headsets at the exhibition. In their place were a few smaller titles that nevertheless benefited from an augmented 3D effect, games like TxK, a trippy space shooter inspired by the 1981 arcade hit, Tempest. Having played Tempest on one of the arcade machines an hour previously, I was totally on board for this revitalized take on the game with its electrifying new soundtrack and easy-to-learn, hard-to-master gameplay, but such a demonstration was clearly going to have a hard time convincing me of the firepower of the Oculus Rift. If nothing else, the TxK demo does hint at a bright future for the technology.

Ever heard of OctoDad? If you haven’t, you should check the trailer out immediately, or better yet, download the game. Aside from DriveClub, the brand new triple-A racer from Evolution Studios, OctoDad was the only PlayStation 4 demo worth playing at the event. In the game you control a haphazard octopus that attempts to pass itself off as a human father. By manipulating your many tentacles with the analogue sticks, you must navigate cramped domestic spaces and complete daily chores without bumping into things or arousing suspicion. Essentially, the goal is to emulate the modern-day man without revealing your crippling ineptitude, which turns the game into a rather poignant biography of my own life. OctoDad: Dadliest Catch has been available since April this year, and whilst it genuinely made me laugh out loud several times, it also served to highlight the gaping lack of new content elsewhere at the show.

Overall, this year’s PlayExpo gave attendees a solid blend of old and new. It was as educational as it was fun, and for that reason alone I can recommend it to all readers who take an active interest in gaming. If you’re knocking about in Manchester next autumn, by all means place your money down and allow yourself be taken back through time, just don’t go in expecting to be enlightened about the future of the medium.