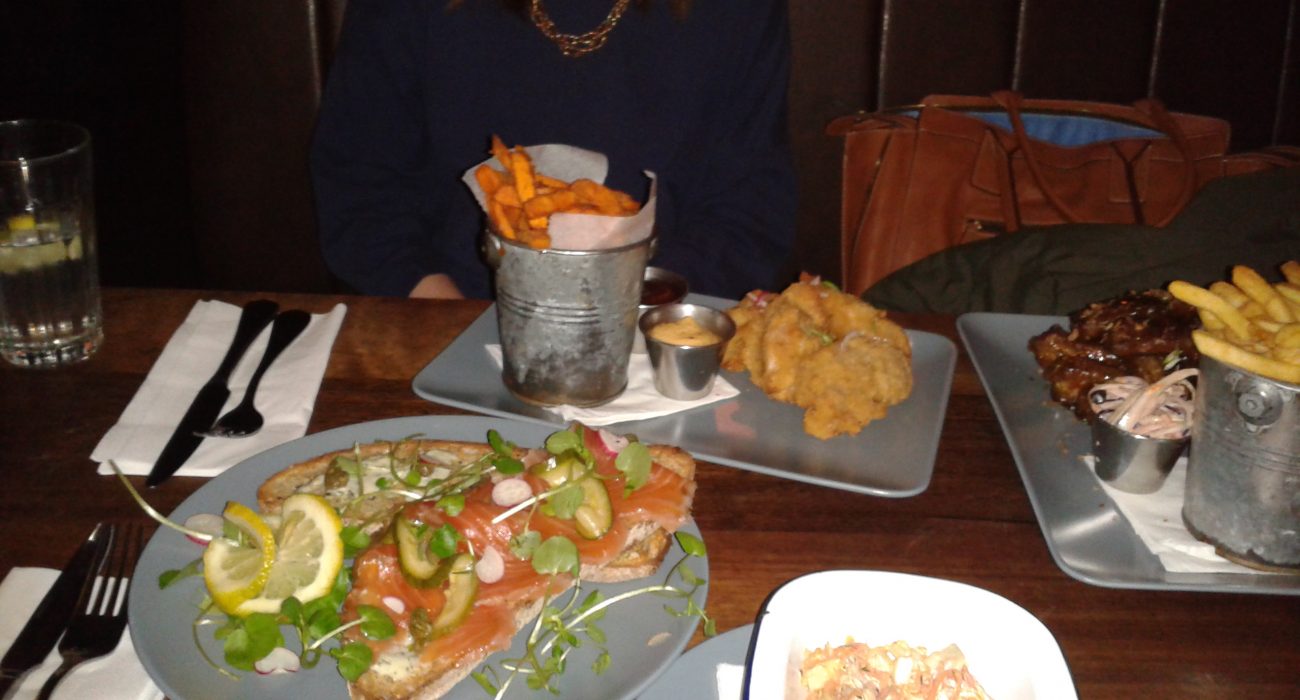 Nothing comes between a girl and her three course meal! Photo: Hester Lonergan

I’ve been to Kosmonaut on various occasions. Primarily, I know it as a great late night weekend hangout—always packed with drinkers. But one Saturday night, I glanced at the food menu and felt surprisingly enticed. I always had the place down exclusively as a popular watering hole and so, intrigued to say the least, I waited only three days before pouncing on the opportunity to have dinner there.

My initial prejudice was quashed when we were shown to our table. What I thought was Kosmonaut in its entirety was actually only the first room; turning right past the bar an expansive seating area stretches out ahead, and en route to the bathroom downstairs I spotted another room—this one with a ping pong table. In the dining area, the atmosphere is subdued yet lively, making it pleasantly viable for either dinner or drinks.

Sipping on a sweet vermouth, we perused the menu. A few well-chosen starters pre-empt innovatively-filled sandwiches for the lighter diner, fashionably-topped pizzas for the unadventurous, and salads and mains both classic and classy. In traditional research-mode, we decided upon three mains: a gin-cured salmon sandwich, black pepper ribs and buttermilk fried chicken. The service was almost instantaneous, coming before the waiter could bring us a bottle of biodynamic red wine (no chemicals, no compromise on taste).

We treated the cold dish as the starter; thickly sliced salmon delicately laced with fruity gin lay on top of toasted bread, scattered with homemade pickled cucumber and salty capers. I could have eaten it for breakfast, lunch or dinner in equal measure. Actually, scratch that: I would eat it for all three, in one day.

The ribs came with a pot of chips and fennel coleslaw—an enticing alternative to cabbage. Thick and juicy and generously coated in a sweet, peppery sauce, the flavour levels of the meat were interestingly complex. The chips were like chips should be: crisp and golden outside, soft and fluffy inside. The fennel coleslaw was a nice touch, but in comparison to its accomplished counterparts, underperformed a little.

Encased in crunchy buttermilk batter, the succulent, boneless chicken was a real winner. I am reliably informed that fried chicken is the new pulled pork: expect to see it winging its way onto a restaurant menu near you, covered in syrup or jam or some other counter-intuitive sickly accompaniment. Refreshingly conservatively, however, ours came with Texas BBQ sauce and chipotle mayo, which spiced up the meat and optimised its mellow flavour. The sweet potato chips that came along for the ride were more seasoned than usual and carried delicious new dimensions of taste. Alas, regular recipe coleslaw saw the same fate as its fennel friend.

It seems that no element of the establishment is accidental. In a conversation with the manager, I mentioned the long list of craft beers that they reputedly sell, and he replied with an assured confidence that “I like to think that everything we do is craft.” The staff are proud of the place, and rightly so. Dining at Kosmonaut rendered me surprised, impressed and a little philosophical. There is more to it than meets the eye, even if the first glance was plentiful.