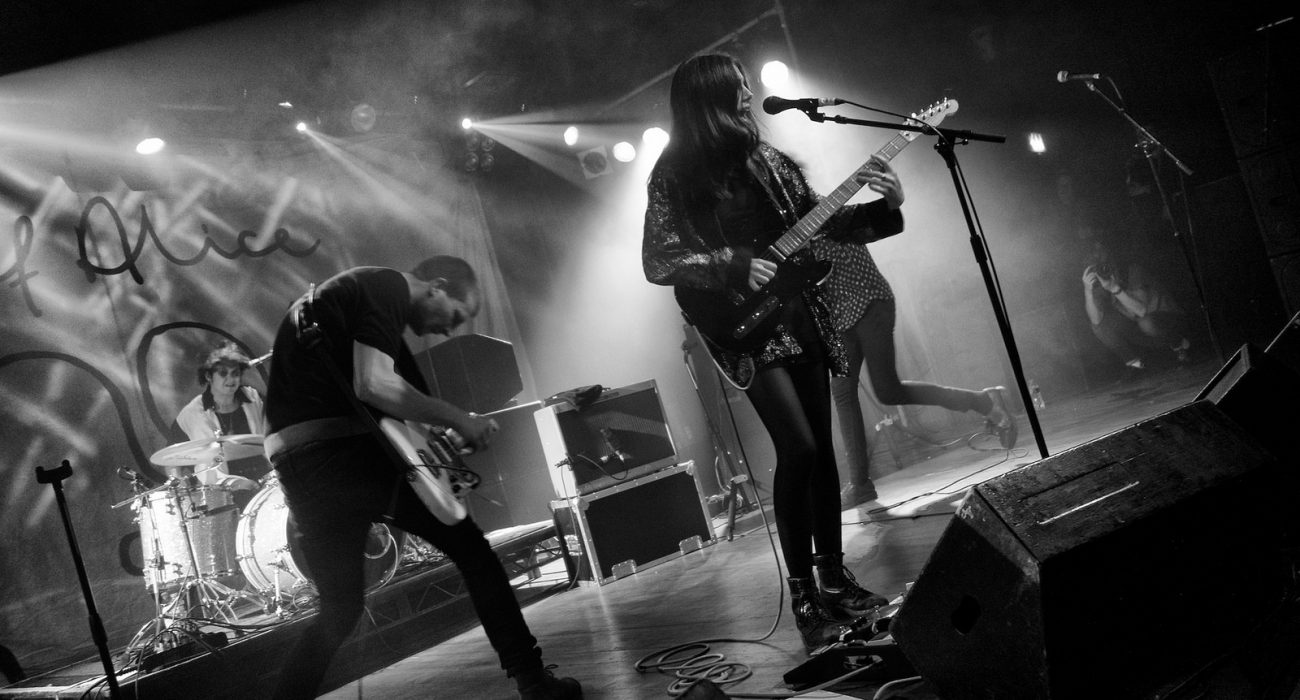 Wolf Alice take their name from an explicitly gory Angela Carter short story in which the protagonist is raised by wolves and, when they are shot, adopted by a nunnery who attempt to civilize her. At the first sign of rebellion, Alice is sent to live with the Duke; a corpse-eating man with no reflection. Carter explores themes of feminism and the outsider, warping the traditional fairy tale with cleverly gory imagery that stays wedged in the mind. Wolf Alice’s music isn’t as heavy or gothic as the name would suggest, so I’m curious about the choice.

The band, which originated as Ellie Rowsell, and Jason, and expanded to include Joel Amey and Joff Oddie, sit down in the Students’ Union and I immediately ask about the name. A bit of awkward laughter follows but lead singer Ellie admits to not having read it. Ellie explains modestly that she chose the name “four years ago” when she “never really thought we’d be a band that people would listen to but she just liked the kind of vibe of [Wolf Alice].” I wonder if she identifies with the feminist themes in Carter’s writing but she says that it was “more the dark fairy side” that appealed, along with the outsider theme, which resonates in her own work, for example in Moaning Lisa Smile.

They’ve played Manchester five times before, but they’re still excited for this evening, “I feel like I’m coming up,” laughs Joel. They used to visit friends who lived in Fallowfield—Joel fondly recalls an evening when, “one of our friends ate a big tub of hair gel in Redrum,”—nodding to Joff—”he now plays in a band.” This endearingly playful band dynamic comes through in their music.

Talk turns back to Wolf Alice. I ask Ellie if she reads a lot: “Well I wouldn’t say I’m a bookworm but I have read a fair few.” I ask if she has a favourite author. “I find this favourite stuff hard to pick. If I like a book, I’d sort of think, ‘I want to go and read a completely different book.’ If I like an album, I’ll never be like ‘I’ll go and look at all their other albums.'” This multifariousness is characteristic of the bands sound, fusing the strands of alternative rock; grunge in ’90 mile beach’, punk on ‘Storms’, even folk on ‘I am disaster’, always with the slick gloss of good pop production.

The band’s range of musical tastes is “very sporadic.” They like everything from traditional American folk, with Joff citing “that whole kind of 70s thing, like John Martyn,” and even John Jacob Niles, an operatic folk star from the 40s beloved of Bob Dylan as references. Joel chips in, “yeah, it goes from that to Miley Cyrus.” “We’re all big fans of people who make good pop music,” agrees Theo. It often seems that pop has become a dirty word among bands who make guitar music, but refreshingly, they peg themselves as “yeah, pop. we don’t play 10-minute jams or anything like that.”

Wolf Alice are all in the 21ish club, watching childhood friends get jobs and, sort of, become real people. Are they starting to feel… I search for the word, “old,” offers Theo. Well, yes, but also in the sense that university has become de rigueur for our generation, do they ever feel a bit left out? “I actually do,” agrees Theo, but he always wanted to play music so joining a band was the natural career path. Joff trained to be a primary school teacher but “didn’t really like uni.” Joel sums it up succinctly, “we went to all the same parties as everyone else, and it just didn’t work.”

Wolf Alice were one of last year’s most blogged-about bands and are incredibly popular on Tumblr, the preserve of the younger teen fans. Part of this appeal is the angsty quality of their lyrics and riffs, the other part is their sartorial prowess. They all agree that looking the part and “making an effort” is important to the show. Theo jokes, “when I was younger, because I really wanted to be in a gang or something, the idea of a band uniform used to really appeal.” Ellie chips in that, “if it happens it happens,” but when “someone tells you to do it,” it looks forced. Their style has evolved organically, and they don’t have any pre-show superstitions or rituals, “except for a little hug.”

Ellie went to an all-girls school, and she thinks that has shaped her, “but in a good way, because it forces you to be the boy and the girl.” None of the girls she knows “play guitar or drums, for whatever reasons.” I ask her why she thinks this is and she says maybe people think of the instruments as “aggressive.”  She continues, “I don’t know that many girls making heavy music… but maybe it should be pushed more.” While she agrees that sometimes the girl singer/boy band dynamic can be naff, she doesn’t see herself as “a girl singer in a boy band” pointing, “I can also play guitar and I write music as well.”