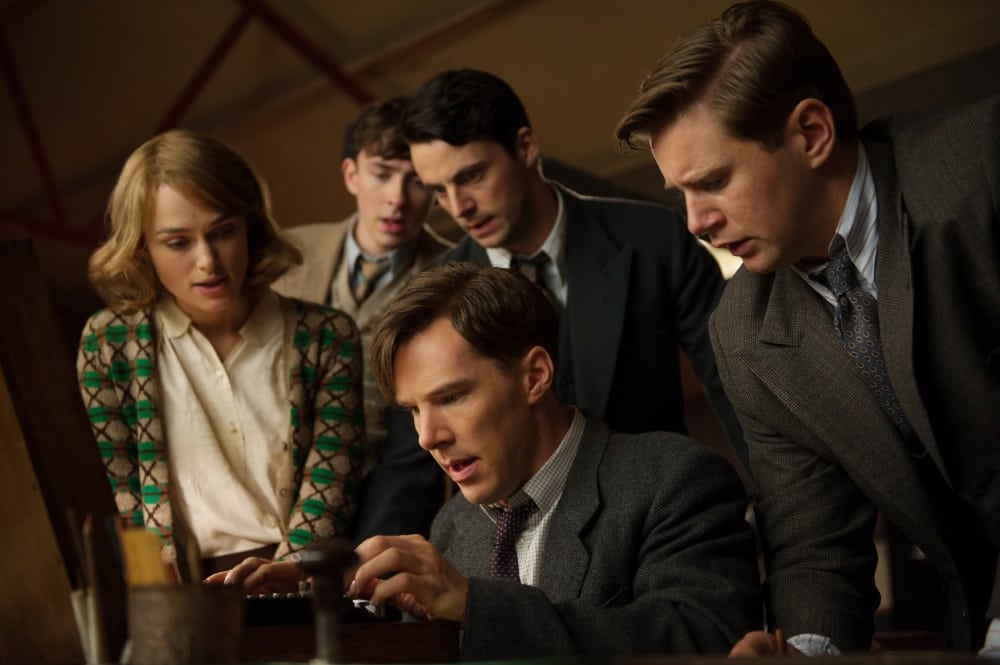 Many film makers in recent years have lashed every drop of creative potential out of the two World Wars, and it comes to be that any movie-goer could be forgiven for assuming that any new release set in this grim period in human history will end up being ‘just another war film’. But, thankfully, a promising number of directors seem to see the crisis of originality in which the war genre finds itself­— David Ayer was one man to thank here for delivering the refreshingly gritty and bloody Fury to us last month, and now Norwegian Morten Tyldum has given us an exciting new WWII spy drama to freshen the genre’s stale breath.

The Imitation Game tells the tragic tale of British mathematician and cryptographer Alan Turing (played with characteristic excellence by Benedict Cumberbatch). Upon the outbreak of the Second World War, he is summoned to Bletchley Park to assist with the battle against the infamous German encryption device – the Enigma machine. Convinced that Enigma cannot be broken by conventional means, Turing sets out to build a machine that will decrypt all German communications at the flick of a switch. The problem? His co-workers like his idea about as much as they like his tactless and snarky attitude. Turing’s personal life also has the potential to sabotage the operation – he is homosexual in the days when gay people were treated as the spawn of hell; Turing’s agony at the forced concealment of his identity has a profound effect on the film’s narrative.

The quality of the film’s intricate plotting cannot be overstated. The narrative hops between three points in Turing’s life – his schooldays at Sherborne, his time working in Bletchley Park during the war, and the later events surrounding his conviction for homosexuality that led to him taking his own life at the age of 41. Deception is always going to be a prominent theme in any espionage drama, but few biographical films manage to mirror this theme so well in their relationship with the audience as The Imitation Game. Tyldum slowly feeds us information about Turing that ensures we always find him sympathetic, even when he’s being insufferable to his colleagues. The gradual revelations about the man’s past and future—which are perfectly positioned in the narrative frame—make what starts out as an entertaining spy drama become a deeply moving tragedy of distinctly human proportions.

As anyone familiar with the extent of the man’s talent would expect, Benedict Cumberbatch is utter perfection as Turing. A biographical drama is dependent on the strength of its lead performance more than any other genre of film, and when you have as prodigious an actor as Cumberbatch in the mix, you can only expect magic to happen. That said, he still leaves room for other performers to have their turn in the spotlight, most notably Keira Knightley, who does fine work as the sole female cryptographer at Bletchley Park.

The movie is not without its problems, though­— a number of minor characters are set up who inexplicably disappear just when we want to find out more about them. Charles Dance and Mark Strong are two actors who fall victim to this waste of talent. And while the film avoids outright sentimentality, there are times at which it feels like it’s trying a little too hard to draw laughs and tears. Sometimes it’s almost as awkward as Turing’s own social skills. My biggest problem with the film though is that it veers alarmingly close to being too reverential to its subject in the closing scenes. When you’re humanising a character through a biopic, one of the biggest errors you can make is to nudge your audience with an unsubtle reminder about how wonderful they were. It comes within a fraction of a millimetre of completely derailing the movie— that’s how poorly considered the film’s final moments are.

That being said, The Imitation Game is well worth your while. Within the canon of recent WWII films, it achieves brilliance but falls short of greatness. You can count on it being a big player come awards season, but I’m pleased to report that it’s more than a stuffy Oscar-baiting melodrama. It is still every bit as moving and entertaining as its subject matter promises to be.