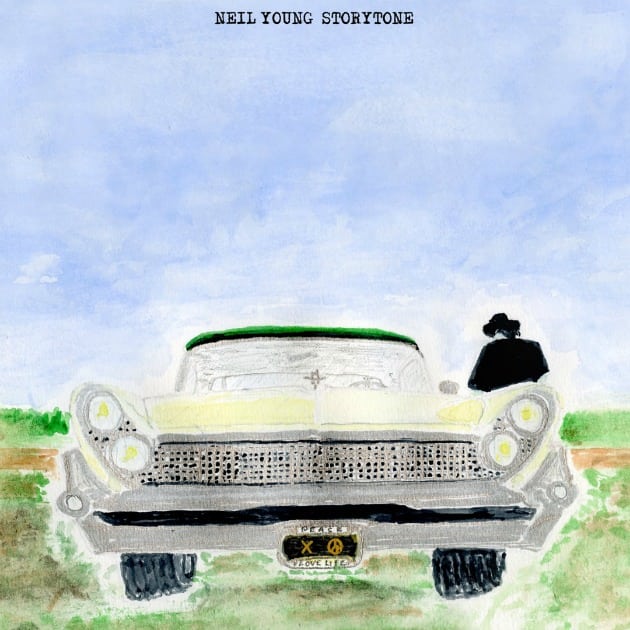 Neil Young’s 35th album is certainly an interesting one. Storytone contains two discs; one of Neil performing the album solo; the other consisting of the same songs yet this time backed by a 92-piece orchestra or jazz big band (talk about extravagant). To put this experiment in duality simply, some of it works, and some of it doesn’t.

Romantic opening track ‘Plastic Flowers’ is a classic demonstration of Neil’s knack for good song writing, even its lyrics do sound like they are written by a passionate adolescent rather than a man approaching his 70s. ‘Who’s Gonna Stand Up’ is Neil’s attempt at a modern day environmental protest song. However its calls for listeners to “stand up and save the earth,” by protesting against fracking and fossil fuel extraction, just seem a little hollow. They are especially weak when the track following it is called ‘I Want To Drive My Car’, and is truly the most naff song on the album. Both ‘Glimmer’ and ‘Say Hello to Chicago’ feel very middle of the road in relation to Neil’s impressive past output. Thankfully, this is where the second disk saves the day, as the big band backing on ‘Say Hello to Chicago’ blasts the track full of life. The backing band, thankfully, also save the day with ‘When I Watch You Sleeping’, and ‘Like You Used To’ (a song you can’t help but connect to with Young’s recent divorce to his wife of 36 years).

Storytone picks up towards its end with ‘I’m Glad I Found You’, my personal favourite song on the album. Its beautiful sweeping orchestral sections serve their purpose of heightening the songs emotiveness. Seeing as the tracks rarely work on their own AND with backing, you wonder whether it was worth making this a double album (of sorts). Whether it works or not, it’s certainly interesting to see both sides of the story. The last year has been an interesting year for Young; he became a tech entrepreneur, had his second book published, released an album of lo-fi covers with Jack White, and divorced his wife (and subsequently has found a new girlfriend a month later). The fairly average Storytone feels like it may get lost in all this commotion.