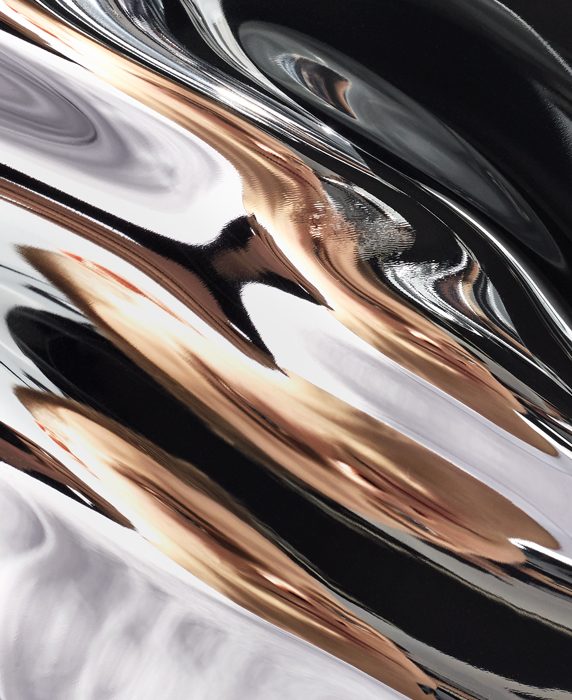 As a founding member of the renowned Hessle Audio label, Pearson Sound, a.k.a. David Kennedy, is amongst the most influential figures in the UK club scene. The label has built a reputation of consistently being at the cutting edge of dance music, while Pearson Sound, Ben UFO and Pangaea mirror this in their varied and accomplished DJ sets.

With an extensive back catalogue of EP releases under his belt, Pearson Sound is due to release his debut full-length LP next month. “I’ve always been asked about doing an LP and the timing just felt right now. I had a particular signal chain set up in the studio and had switched up my way of making music a couple of years ago. After I had got a few tracks together I realised that I wanted to write an LP.”

The excellent artwork for the album features heavily edited photos of the producer (pictured above). “Andrew Stellitano was the art director for the project. We should be doing a couple of features near the release date which will explain fully the process we used to create it.”

With two- or three-track vinyl releases being by their design very club-focused, a full-length release can see producers head in experimental directions, however Kennedy asserts that the LP is still very much aimed at the dancefloor. “I still see the album as a club record, several of the tracks have featured in our DJ sets over the last year or so. It’s about presenting what I’ve been up to for the last couple of years, and presenting a cohesive body of work. The LP format allows for a greater breadth of material. With a 3-track single, sometimes throwing something ambient on there can feel a bit token, and I wanted to present my work at different tempos with a bit more context.”

Hessle Audio had a quiet 2014, yielding just one release from new addition Bruce. “We’ve always favoured taking our time and making sure the music is right rather than rushing anything out. All of us always has to be in agreement about the track we put out.” Hessle Audio artists seem like a tight knit crew; I question if a producer’s personality impacts upon selecting them for release. Do they get to know each producer before making this decision? “Not always personally, no. Our first release was by a Romanian who was sending us tracks online for the radio show. But a lot of the artists on the label we know from the music scene in London and we see each other socially.”

Pearson Sound has released a number of collaborations in the past with the likes of Midland, Joy Orbison and Boddika. “I’ve done other collaborations although none of them have been released. I prefer to wait until we have actually finished some music though before announcing anything though as it doesn’t always work out to plan.”

The Hessle trio are currently in the midst of a UK tour which sees them play a number of all night long b2b2b sets. Despite being well-versed in playing together over the years, “we always surprise each other, there will always be tracks that the others play that I will have never heard before, or even have overlooked.”

“We’ve known each other for approaching 10 years now and have also been DJing together that long, so we are very comfortable playing together. Sometimes we play separate sets in addition to playing b2b if it feels right.” The tour stops off in Manchester this Friday, 20th February, at Sankeys. This leg is in coalition with the Transmission series and will see Hessle joined in the basement by techno heavyweights Karenn, whilst Spektrum hosts a Nonplus takeover with Boddika and Joy Orbison.

Pearson Sound is no stranger to Manchester crowds; I fondly recall his all-night set at Soup Kitchen last February with one of my favourite ever ends to a night: HudMo’s ‘Ooops!’ into DJ Gunshot’s ‘Wheel ‘n’ Deal’. “I’ve been playing in Manchester for a while, and in a variety of different venues. I really enjoy playing at WHP, the sound and tech setup is always spot on and the crowd are up for it.”

“But then sometimes it is nice to play in a more intimate surrounding, such as at Soup Kitchen. That was definitely a highlight of 2014. I’ve never played the main room at Sankeys before so I’m looking forward to checking that out.”

Expanding on how he approaches sets in these varying settings, Kennedy continues: “That’s the essence of DJing really, to be able to judge what’s appropriate for a particular venue, crowd, or set time. What might work in a sweaty basement with 100 people at 5am might be wildly out of place when playing to 5000 people in the middle of summer at a festival.”

“Playing all night long allows us to pace the night as we see fit, rather than having to adjust your set because of who is playing before or after you. Also doing the warm up too gives us the chance to play slower or more experimental music that we don’t often get the chance to play.” How does he mentally prepare for, say, an eight hour-long DJ set? “A nice meal and some peace and quiet before the night normally helps, especially if it’s a long set. Even if I’m feeling really ill before DJing, getting in the zone normally makes me forget about anything else if the gig is going well. If I’m not enjoying myself at a gig it’s normally because I’ll be having trouble with the equipment or monitoring.”

Finally, reflecting on his favourite places to play worldwide, Kennedy shares: “In terms of a city, the fact that Berlin doesn’t have a curfew is amazing. Nights finish when it feels right, rather than when a bouncer comes and shines a torch in your face at 2:55am. As a DJ, when you are given an open-ended slot it’s great! Clubs like Berghain, Under Bron, Golden Pudel, Wire, Sub Club, Output are all a pleasure to DJ in. And previously venues like Plastic People and Trouw but they have sadly closed now.”

Pearson Sound’s LP is released on the 9th of March via Hessle Audio.

He plays Sankeys this Friday, the 20th of February. We have five pairs of tickets to give away, simply email your full name to [email protected] before Thursday the 19th with the subject title ‘Hessle Competition’ for a chance to win.