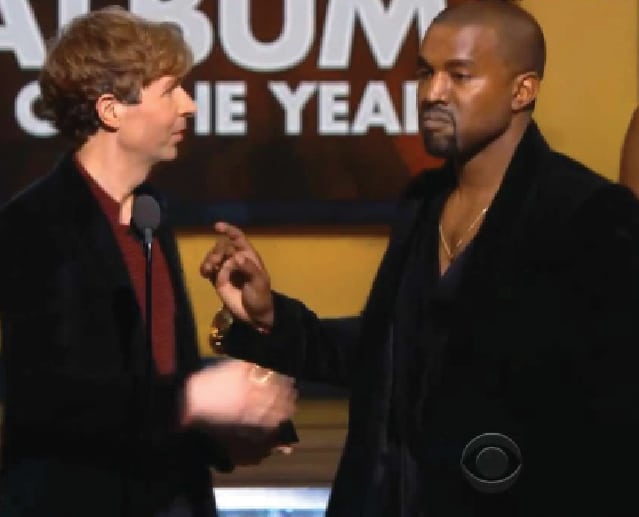 Opinion: Saving The West ‘Till Last – 57th Grammys Beck With A Bang

The 57th annual Grammy Awards ceremony on Sunday night got off to a devilishly rousing start. AC/DC had kicked off proceedings with their first ever Grammys performance, and Sam Smith received the first award of the evening, the highly-coveted Best New Artist. Everything appeared to be running smoothly. If we fast-forward about two-and-a-half hours, we arrive at the Album of the Year category. Beyoncé, Ed Sheeran, Beck, Sam Smith and Pharrell Williams are all contenders. It was the surprise award of the night, as long-serving indie troubadour Beck scooped the prize for his 12th studio LP, Morning Phase.

No-one seemed to be as surprised as Beck himself, yet what was most surprising to the audience and viewers was the sudden appearance of Kanye West on stage, who moved towards Beck as if he was about to take the trophy from his hands. Instead, West turned away, quickly jumped down and disappeared—presumably further up his own arse. In what was clearly a reprising nod to his meltdown at the 2009 MTV VMAs, when Taylor Swift was accepting her Best Female Video for ‘You Belong With Me’, West probably thought he was being funny, but once again he couldn’t help but make himself the centre of attention. This was not his moment. He tarnished what was ‘arguably’ Beck’s crowning achievement in music. But worse was yet to follow.

Fast-forward again to West’s after-show interview: “We ain’t gonna play with them no more. Beck needs to respect artistry and he should have given his award to Beyoncé. At this point—we’re tired of it, because what happens is, you keep on diminishing art and not respecting the craft and smacking people in the face after they deliver monumental feats of music, you are disrespectful to inspiration.”

Let’s put this into some kind of context, shall we? Kanye himself has won 21 Grammys in his 11-year career, Beyoncé, who through no fault of her own has been dragged into this mess, has won 20. Hardly ‘disrespectful’ or ‘diminishing of art’, is it? If I wanted to get really pedantic, I could point Kanye to the list of credited writers on Beyoncé’s album, which stands at 25. The total number of writers credited on Morning Phase stands at one. Beck. Beyoncé only contributed vocals to her album, whilst Beck not only contributed vocals, he also happened to play 13 other instruments on there as well.

I am by no means criticising Beyoncé, her album (despite the overwhelming and seemingly unnecessary quantity of writers, producers and composers) is wonderful, and by Beck’s own admission it should have won the Best Album award, and she is a truly exceptional singer and role model. My issue here is with West’s hypocrisy. West telling Beck to ‘respect artistry’ is similar to a toddler taking a break from finger-painting to tell Michelangelo he’s shit. His argument carries no weight behind it, yet it is one that has got people talking. Perhaps that’s what he wanted all along. If that is the case, then it has seemingly backfired. His stunt(s) have boosted Beck’s album sales by more than 1000 per cent in the two days since the ceremony.