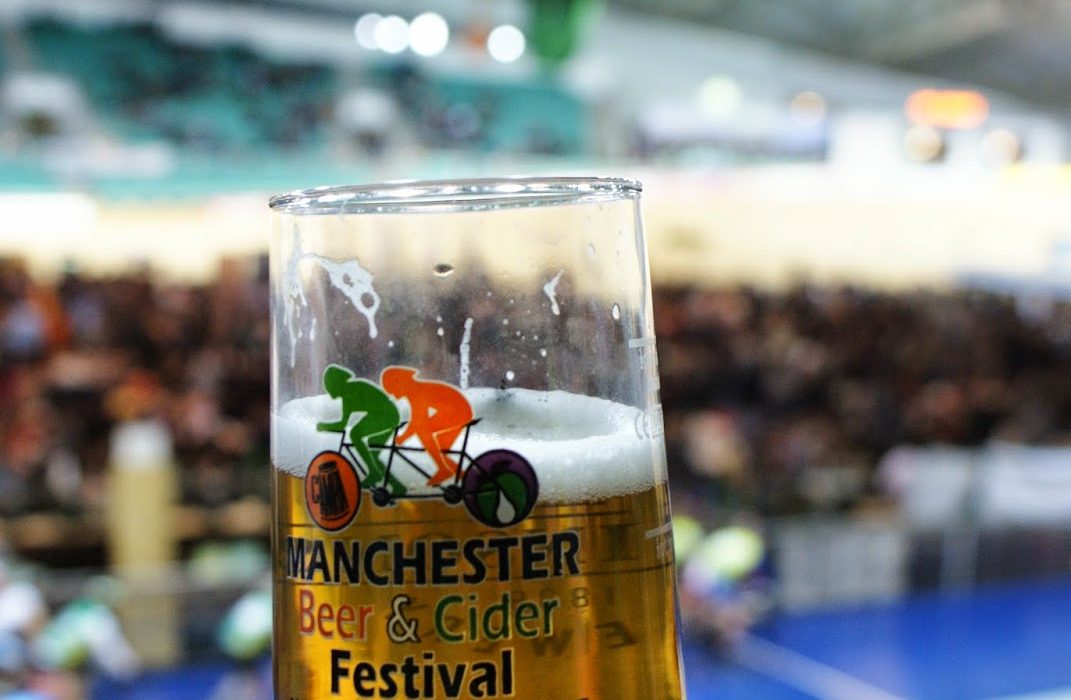 An annual testament to the world’s favourite drink, the Manchester Beer and Cider Festival saw thousands of drinkers descend on the Velodrome in SportCity to sample over 400 brews, get merry, and fall over.

This was by far the most colossal beer festival either of us has attended. Armed with glass and programme, we took a step out onto the stands to admire the drinking floor. The sheer intensity of beer-related movement made what we soon started calling ‘the pit’, a pretty impressive sight. We quickly got into the mix, and slid into the rhythm of filling our halves and retiring to a cosy spot on the concourse. One of the highlights for me was holding an India Pale Ale in one hand and a hotdog in the other, watching cyclists race round the track—a combination we can all relate to. A close runner up was an A-list celebrity encounter with the one and only Chesney from Coronation Street.

There being hundreds of beers there, it was obvious we wouldn’t be able to scratch the surface in terms of trying everything, which is a shame as some really exciting brews were available. However we made a pretty brave attempt, powering through the halves right up until the last barrel aged stout, whilst managing not to get too smashed, which can’t be said to everyone I saw wearing a cone/shark hat. Here is a rundown of a few of the beers we put into our faces.

Port Stout 4.8% – Hanlons Brewery
This beer combines the tangy, rich and fruity red wine flavours from the port with classic, smooth stout character. A taste of this quickly turned into a full pint. We feel like this would be the perfect pie accompaniment.

Rhubeer 4.5% – Celt Experience/Wiper and True
This is one of only three sour beers available at the festival—so it naturally stood out. The aroma is midget gems, with strong forest fruits top notes. This is apparently both brewed and fermented with fresh rhubarb, and there is really no mistaking this. The tart sourness comes through in the end but it’s relatively mild and well balanced. Good stuff.

Peach Melbear 4.4% – Beartown Brewery
This is a bit of a strange one from a brewery in Congleton we are fans of. It has a really light body with fresh and sweet elderflower and peach flavours. The beer is refreshing, almost cordial like, but can’t see myself drinking more than one pint of the stuff.

Belgian Blue 4.9% – Bradfield Brewery
Feel like it might be a little late in the year for a Christmas beer, but there you go. This is an easy drinking best bitter, with berries on top and warming caramel undertones. The head actually is a little bit blue!