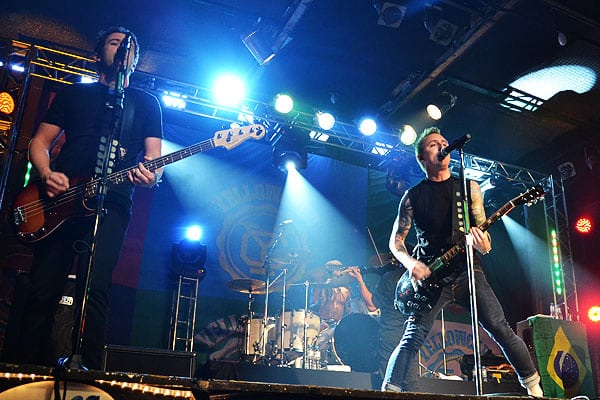 Yellowcard are no newcomers to the pop-punk scene. Touring with ska-punk giants and all-around fun guys Less Than Jake, it seemed like the perfect recipe for a great show.

I wanted to like it, I really did – but it felt like I was watching a Yellowcard tribute band. They were playing Yellowcard songs, and they were doing it well, but it just didn’t feel like a Yellowcard gig. They opened with a few songs from their newest album, Lift a Sail, and one could be mistaken for thinking they hadn’t rehearsed enough, because most of the lyrics were tuneful ‘oh’s. They seemed to have forgotten the punk in pop-punk; the general feeling in the crowd seemed to agree with me. Even on some of the songs from their older albums, the performance lacked the refinement one would expect of such a veteran band.

It wasn’t all bad, however. Frontman Ryan Key really brought ‘Only One’ to life, and the whole crowd were singing along by the end. Violinist Sean Mackin never missed a beat, and his parts on ‘Light up the Sky’ really brought the song together. One has to applaud them for not just reliving their glory days; only playing three songs from their hit album Ocean Avenue. The band eventually fostered a brilliant audience response with ‘Awakening’, and hearing the entire crowd singing it back to the band did capture some of that pop-punk magic I was hoping for.

The band closed with ‘Ocean Avenue’, and much like the theme of the song, I was left somewhat heartbroken. I really want to experience the Yellowcard of a decade ago; young and full of energy, but I feel that they are gone – and that saddens me.