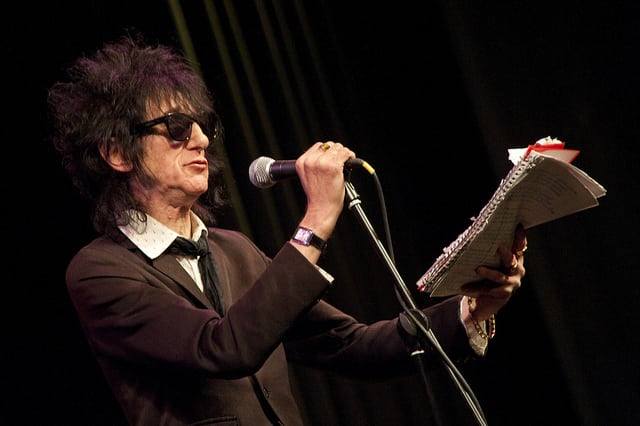 John Cooper Clarke: a poet, a comedian, a punk, a Mancunian. You either love him, or you have probably never heard of him. Revolutionary in the 1970s, JCC earned the title of a ‘punk poet’, performing on the same bill as the likes of Manchester’s The Fall and Joy Division. Punk was a movement of anger and rebellion, its people were not expecting the love of poetry that JCC evoked in them. With a grittiness, rawness and comical crudeness that was a far cry from Wordsworth’s ‘Daffodils’, JCC made poetry accessible and enjoyable for a new and unsuspecting generation. Now marked as a legend in music, poetry and culture, JCC returned this month to his hometown and most loyal fan base for a memorable night of profanity and politics.

Opening with a poem dedicated to the guest list of the night, JCC proved his ability to write a brilliant and hilarious poem about even the most mundane of topics, humbly stating that he was “somewhat of a rhymer”. Over the course of the evening, he dipped in and out of an old and battered notebook filled with ingenious scribblings and anecdotes. The first half consisted of relatively new and unknown poems, JCC venturing into the world of limericks with ‘Necrophilia’, who said you can’t achieve comic perfection in two lines?! To the room’s excitement, JCC soon began trailing through his old classics such as ‘Pies’, ‘Chickentown’ (his most favourite after it appeared on The Sopranos), ‘Beasley Street’ and the biggest crowd pleaser, the gloriously despicable ‘Twat’. He also performed ‘Things are gonna get worse’ which as a poem about the effects of ageing, he crudely dedicated to the late Terry Pratchett, apologising for his infamous “lack of empathy”.

His often long and undirected ramblings did not please everyone, but for those who truly understand JCC, they know and accept that this is all part of the wonderful skinny-legged and big haired package. So if you are inclined to poetry that is both hilariously crude and profoundly real, check out JCC, there really is no one, nor will there ever be, like the legend himself.