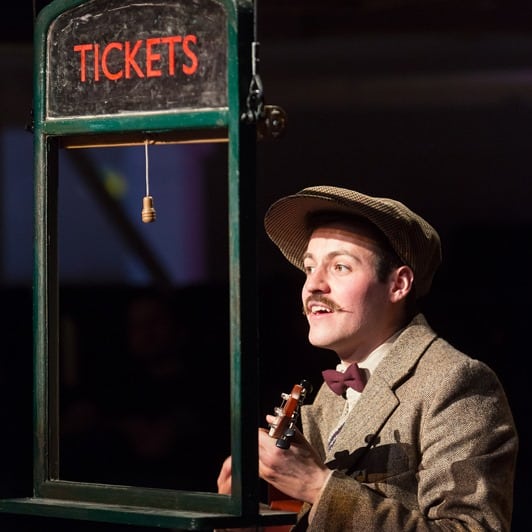 A comic thriller penned by Arnold Ripley, better known for his acting as opposed to his work as a playwright, ‘The Ghost Train’ depicts the tale of a group of disgruntled travellers who have found themselves stranded in a rumoured haunted train station, where—you’ve guessed it—legend has it a ghost train tears down the tracks in the early hours killing anyone who lays eyes on its phantom driver.

‘The Ghost Train’ was Ripley’s biggest hit, having a two-year West End run followed by two film adaptions. The tale itself is satirically completely of its time, however, as production company ‘Told By An Idiot’ yet again shake up what we expect. Our narrators, who don’t simply feed the script to their characters, also provide sound effects for their footsteps, and even kisses with the help of duct tape. This is before they are prematurely whisked from the stage by the station master.

Quirks also include a six-foot Spaniard in drag (Javier Marzan), playing the originally depicted prim pensioner Miss Bourne. Not forgetting her parrot Joey, who is in fact Joanna Holden in costume.

Wherever possible the production welcomes a new take on their storytelling, whether that be impromptu dance routines, a company of instruments made from furniture (complete with conductor) or an underwater scene complete with flying fish on zip wires.

Despite its promising start Hunter seems to drop the plot’s development for the sake of a few gags. It’s arguably overly animated display isn’t everyone’s cup of tea. Although the pure energy and enthusiasm that exudes from the cast is undeniable.

With an impressive entrance and exit combined with a number of collaborative takes on storytelling, the show delivers an unexpected and haunting twist.