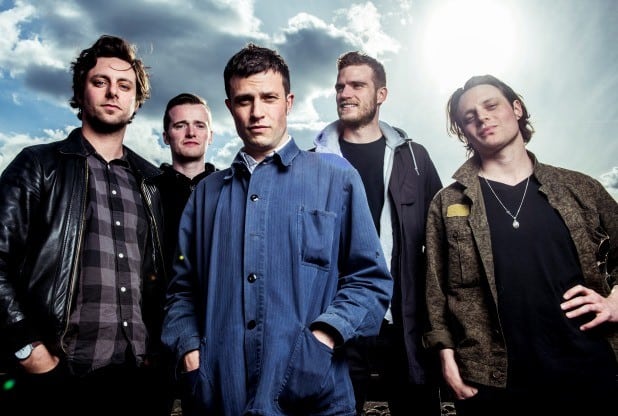 “We did everything ourselves, and we’re going to live and die by those decisions,” says Felix White. The guitarist in The Maccabees is talking about their upcoming LP Marks To Prove It, their first album since 2012’s Given To The Wild.

For Felix, the area where the album was recorded, South London’s Elephant and Castle, was a large inspiration behind the new album. “For want of a better word, Elephant and Castle is gritty. It is kind of beautiful in a way, as it just represents real life. Lots of different types of people live there, and it’s one of the few places in London left with a real sense of community even though that’s slightly getting pulled apart at the moment by the regeneration of the area.”

“It was being involved in that — we didn’t go away anywhere, we just recorded the whole thing there. [The record] definitely belongs there.”

The band have gone from strength to strength since the release of their debut album Colour It In in 2007, with Given To The Wild receiving a Mercury Prize nomination in 2012. However Felix is quick to point the difference in approach with this album. “It’s very different to GTTW, most noticeably there’s much less layering in it. GTTW was much more conceptual, and we used layering to intentionally give it a mood. This one we are trying to make it sound more like the room it was recorded in, more natural. Back to a band just sounding like a band.”

Over the last eight years, the band have certainly built up a strong following both at home and abroad, with many of their songs gaining recognition through their use in British television shows. Despite having a supportive fanbase, The Maccabees are far from relaxed when it comes to releasing new music. “It’s still so nerve-wracking to release albums! It’s beyond an honour to be able to release music that sits alongside people’s record collections, but it certainly doesn’t get any easier with each album. In fact the more we’ve learnt I think it has actually got harder, because everyone kind of pulls in different ways.”

“When we first put records out we were kind of bumbling along, and now it feels precious. I suppose the pressure comes from just wanting it to be great, and not something we could have made five years ago. We want to move along and progress.”

Part of this progress is the movement to self-production of their music. “My brother Hugo took the reins on the production, as he’s definitely more advanced than the rest of us on the technological aspects of it. It was a good learning experience though, even though it sometimes lacked a bit of outside perspective, which is why it took a lot longer.”

“In addition to this the album was made in very enclosed space, so very few people apart from us have heard it until very recently, which has been quite odd”.

Alongside new material, 2015 has also seen The Maccabees return to the live scene. The band played a mini UK tour in May, and have so far this summer: supported Mumford & Sons at their Gentlemen of the Road festivals in the USA and Australia; played a storming show at Glastonbury featuring a guest slot from Jamie T; and have a full tour in support of the new album scheduled for the autumn. “It feels very good to be back on the road. You kind of weigh it up a bit, because we haven’t played for so long people can’t quite remember what a Maccabees gig is like, so we’re trying to gauge that. The tours have seemed to start quite slowly and ended up being brilliant. It just takes a little while. We’ve got such different styles of music over each record now that people almost don’t know what to expect, but they’ve been brilliant”.

While it may seem like the band took a break off touring and writing since the end of the Given to the Wild tour in 2012, Felix certainly doesn’t think so. “It may seem like a break, but it wasn’t one at all. We went straight into the studio, and thought we were just going to write and put out a sequel straight away. We all wish we could have given ourselves a few months off.”

“We didn’t let ourselves do that, so we were kind of in a sense of panic, and a year down the line hadn’t really written anything that we thought was good enough. In hindsight it was a bit of a mistake, but it was out of being keen more than anything.”

While The Maccabees may be hesitant about singing their praises, the new album sounds great. One thing is for certain, it’s nice to have them back.

Tags: colour it in, felix white, Given to the Wild, Glastonbury, interview, Manchester, marks to prove it, Mercury Prize, The Maccabees