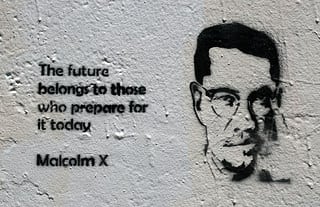 Review: The Autobiography of Malcolm X

When Barack Obama took office in 2008, it was implicitly implied that he would help to improve the lives of African-Americans. In the 2008 election, 95 per cent of the African-American community who voted did so in favour of Obama, with this figure only dropping by a few percent in 2012.

However, the figures for the lives for an African-American show little-to-no improvement under Obama’s administration. During his swearing-in speech, Congressman G.K. Butterfield, the Chairman-elect of the Congressional Caucas for the 114th Congress, highlighted key statistics that illustrate Obama’s failings to reduce racial inequality. One black child for every three lives in poverty. An African-American is twice as likely to be unemployed compared to their white counterparts, and the employed African-American will earn $13000 less than their white counterpart.

On top of this, high-profile shootings of unarmed African-Americans by police officers occur consistently, as well as petty and trivial arrests, for many, many years. You can credit Obama with a lot, but for achievements with regards to civil liberties and racial equality… not yet.

It is a shame that African-Americans do not have a globally known spokesperson to defend their rights. Arguably, not since the 1960s, a time of Martin Luther King Jr and Malcolm X—two diverse figures who fought for similar goals but with contrasting methods—has the African-American really had a loud voice challenging the status quo on a worldwide level.

In the public sphere nowadays, more is known about Martin Luther King Jr., with his non-violence philosophy and his “I have a dream” speech, than is known about Malcolm X; however, Malcolm X’s influence and legacy should not be overlooked and The Autobiography of Malcolm X is a first-hand account of what the man stood for, of how he contrasted with King, and a glimpse at what affect he has had on American lives, particularly African-Americans’, today.

Written with the assistance of Alex Haley, Malcolm X’s story took around two years to be written down, fortunately being finished just before X’s assassination in 1965. Haley plays a key role in keeping the book as focused on Malcolm’s different life phases as possible, instead of the autobiography being one long polemic against the Nation of Islam—Malcolm infamously split from the movement in 1963 after a disagreement with then leader Elijah Muhammed.

Malcolm’s bold, uncompromising voice is portrayed throughout the book. At times he is unapologetically discriminatory against the white man, chiding them ‘blue-eyed devils,’ he held for a long time the controversial view that Black people and whites should be separated, and at one point tells a young white woman that there is ‘nothing’ a white person can do to help the lives of the African-American. In fairness, Malcolm later returns to this latter scene with regret.

Ultimately though, Malcolm was deeply proud of his race and dedicated his life to fighting for the basic civil liberties and rights for African-Americans that the American white man already had. This is what shines through in the book. He often criticises African-Americans for being too ‘brainwashed’ to recognise the truth of the racial inequality around them, or the “bourgeois negroes” (African-Americans who live amongst whites in the more affluent regions of the country) for betraying their roots and being friends with the white man. However, this criticism can be interpreted as Malcolm’s way of wanting unity amongst his African-American brothers and sisters—Malcolm believed in the Pan-African movement as well. He taught his fellow African-Americans to stand up for themselves, to defend themselves and to not just passively wait for things to improve.

Malcolm’s views are powerful; they are well-reinforced with historical facts and are vastly distinct from Martin Luther King Jr. He delivers a brutal critique on the March on Washington, calling it a ‘picnic’, as well as the non-violent movements in general in the book, trying to justify why the “negro” should fight “by any means necessary” to achieve justice. His beliefs and arguments have ensured that he has gone down in history as one of the true great African-American activists. He has helped to empower numerous African-Americans.

His autobiography is a must-read for anyone wanting a picture of the racial injustices that occurred in America in the 1940s to the mid-1960s. Unfortunately, it also remains largely relevant today, making the book prophetic in parts. The Black American still suffers now from the same police brutality that it did 50 years ago.

Obama wrote in his own autobiography that Malcolm X’s book ‘…seemed to offer something different. His repeated acts of self-creation spoke to me,’ which makes it an even greater tragedy that Obama has done little to help the lives of the African-American in the spirit of Malcolm X.