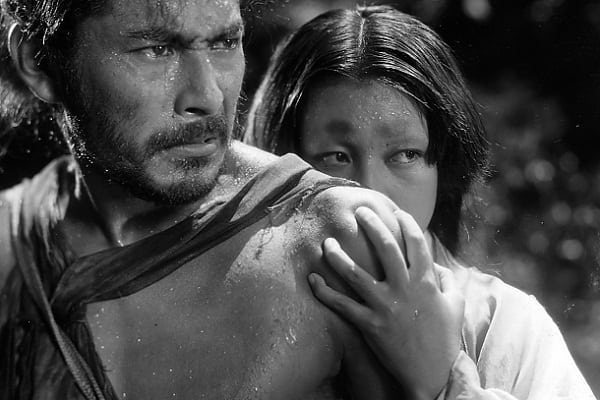 The cinematic legend that is Akira Kurosawa exploded onto the world stage in 1950, and Rashomon is the film responsible for this. Even people who haven’t seen it know the premise—one murder in the woods, and four contradictory accounts as to how it happened. No answers or hints are given to suggest which version of the event is true—we, the audience, are merely left to speculate. It is simple stuff on paper. But when a genius like Kurosawa is behind the camera, even the simplest of plots becomes a fascinating and complex study of the truth and, more specifically, how our characters will distort it to their advantage.

The course of events that everybody can agree upon are thus: a samurai (Masayuki Mori) and his wife (Machiko Kyō) are travelling through the woods, when they come across a bandit named Tajōmaru (Toshiro Mifune). He leads them into a grove in the woods, claiming that a stockpile of weapons is there. A conflict ensues in the grove, and the samurai ends up dead.

What happened in the grove? A fair question, but we will never know the answer. The three characters involved each offer contradicting testimonies (including a chilling sequence in which the samurai’s story is told through a medium). Each testimony conveniently presents its respective narrator in the most favorable light; but also giving testimony is a wood-cutter (Takashi Shimura) who claims he saw the whole thing happen. We might assume that this story would be the most objective, but we soon realize that even his account has problems.

Kurosawa never told the actors which version of events was true. To do so would have undermined the entire point of the film. It is a film that shows us, with tragic beauty, what happens when a person’s obsession with their own agenda obstructs the search for the truth.

For this reason, many will find Rashomon a frustrating film on a first viewing. With most narrative fiction, it is generally expected that all loose-ends in a plot will be tied up. Kurosawa doesn’t just break this rule, he makes a point of breaking it. If what they say is true, that humans are infinitely curious beings who revel in discovering new truths, then Rashomon is a reminder of what happens when the ego gets in the way. We cannot know the truth of what happened to the samurai, and we cannot assume that any one of the four accounts is true. Many people will try – and have tried – to argue otherwise in an attempt to find satisfaction with the film. They are missing the point.

Like other great humanist dramas, Rashomon presents us with a vision of humanity at its most pathetic, but also gives us a flicker of hope as we depart. It is incontrovertibly one of the most influential films ever made, and it remains among the most beautiful and powerful portrayals of humanity’s relationship with the truth in any artistic medium.