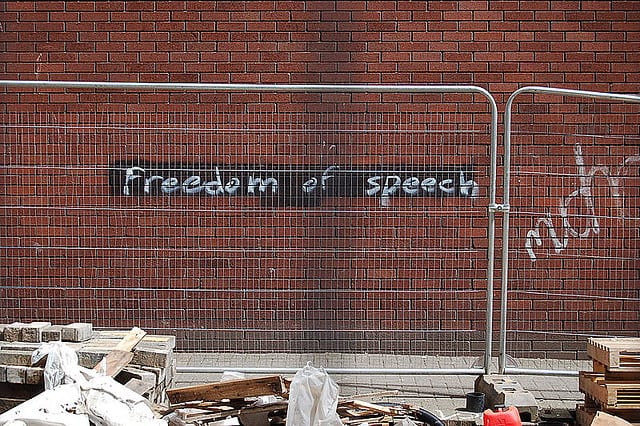 Who decides what freedom of speech is? Photo: Walt Jabsco @Flickr

When I first saw the Students’ Union’s Facebook post about feminist activist and journalist Julie Bindel being banned from speaking at an event on censorship, I wasn’t sure if it was a Daily Mash article. Julie Bindel is an iconic feminist who I was looking forward to seeing speak in Manchester. Reading it made me question how much I knew about Bindel—I wasn’t aware she had been on a “crusade against the transcommunity.”

An article in The Guardian written in 2004 (and easily findable on the internet) titled ‘Gender benders, beware’ seems to be the main evidence for this, much of the content of which she later apologised for. Her writing in the article is crude, suggesting trans people should not be able to use women’s toilets, and arguably uses needlessly offensive language but under even the most extreme definitions it would not be reasonable to call it hate speech or even a crusade.

The Students’ Union however, said Bindel speaking at the university would “incite hatred against trans people.” It must be assumed this would be amongst students of the university, as it was to be a ticketed event. Bindel would not be speaking about trans people at this event—it is a debate on feminism and censorship, and as previously said, Bindel has apologised and distanced herself from the article that caused so much controversy.

Therefore, the Students’ Union must be suggesting that University of Manchester students may come to hate trans people because of going to a debate that features a person who once wrote an article that used offensive language that they later apologized for. If you really don’t like Bindel, you can choose not to go to the event. The mostly likely way this will affect trans people who choose not to go is by clogging up their Facebook wall with the firestorm that will probably continue in the near future.

Defenders of the Students’ Union’s safe space policy will often say free speech protects the right to say what you like without prosecution, not the right to make people listen to you. For free speech to be useful however, it must include the right to listen to what we want. The way the safe space policy has been implemented in this instance limits that right. It stops students being able to organise events, and at their university that there is demand for, and it gives the Students’ Union’s Executive a lot of power to decide who they can and cannot be exposed to based on their ideologies.

The Facebook post also directly criticizes a controversial event organised by The Free Speech and Secular Society regarding Sharia Law. I attended this event and found the audience more interesting than the speakers. I’d encourage you to watch the footage from the event. There was a lot of heckling from the audience, particularly the then executive members of the Students’ Union. The author of the post who was present however, describes the Chair’s attempt to stop heckling as an attempt to “silence and shush interjections from the audience challenging the speakers.” This is not a model of suitable discussion I would like societies to take from the Students’ Union.

As someone who is quite happy with the gender assigned to me from birth, I do think I must be careful when making judgements on what qualifies as transphobia. Despite most of the Students’ Union’s statement reading like a polemic against the devil, using more and more fanciful language to express their rage, the victimisation, abuse and the hardships faced by trans people are coldly real. I wouldn’t support an event that would make these worse or get in the way of progress.

Julie Bindel speaking at the University of Manchester will not change the terrible reality. Crude comments on trans people made in an article over a decade ago—that she has apologised for, does not mean her speaking about feminism in an event about censorship lend legitimacy to transphobia. Instead, her presence helps fuel a useful debate about censorship within the feminist movement today. The Students’ Union’s overarching safe space policy isn’t keeping anyone safe here. It is stopping students being exposed to a debate involving one of the most influential feminists of the last few years.